The Sabre represented the ultimate in piston engine technology, not only in the 1930s when it was conceived, but even by today ´s standards. It was a truly remarkable engine, representing the ultimate in complexity, technology, specific power, and unfortunately .... problems. In retrospect it can be stated that many of the Sabre's woes were due the pressures in wartime England to get the latest technology into production as rapidly as possible, even though many of the "bugs", both design - and manufacturing-related, had not been work out.

Design was initiated in 1935 based on an earlier study for a compression ignition diesel. British Air Ministry Initial Acceptance test were completed on 17 January 1938 rated at 1350 hp. This figure rose to 2050 hp by March. By June 1940 it had passed its Air Ministry 100-h type test on its first attempt at 2200 hp and 3700 rpm, making it the world ´s first 2000 hp production engine.

By 31 May 1939 the Sabre was ready for its first flight in a Fairey Battle at RAF Station Northolt. The first design studies incorporating conta-rotating propellers were initiated in 1941. No production Sabre used this concept, possibly because of other more pressing issues with the engine and lack of a suitably developed propeller. Three-speed, two-stage supercharging, which promised higher boost, was developed in 1942, but again this promising avenue was not pursued and consequently never got into production.

The Sabre was initially manufactured in Acton, a suburb of London, and a shadow factory was later set up in Walton, near Liverpool. In December 1942 Napier ´s became absorbed by the English Electric Group.

Problems started to bubble to the surface as soon as volume production started. The engines used for the type test had been hand built, hand fitted, and carefully assembled by top craftsmen. Production engines on the other hand did not have this luxary, resulting in many mechanical problems, particulary as the engines entered squadron service. The majority of the problems centered on the sleeves and sleeve drives. Sabre sleeves were manufactured from nitrided chrome molybdenum steel alloy forging. It was found that after final grinding of the exterior and the bore up to 0.010 in. out-of-roundness resulted. This in turn would cause sleeve seizure and/or loss of compression. Several "fixes" were attempted, including silver plating of the sleeve.

By sheer coincidence, the Bristol Taurus engine shared the same cylinder bore of 5.0 in. with the Sabre. Testing with Taurus sleeve material, tools and manufacturing techniques was a overhelming success. Amazingly, the Bristol company refused to cooperate to manufacture Sabre sleeves, objected on the grounds their methods were confidential!
It ended with that Sabre sleeves were manufactured from nitrided austenitic forgings using Bristol tooling, making a major constribution to saving the Sabre program.

Even with improved manufacturing techniques, plus numerous design refinements, the engine was not out of the woods. It has been documented that the Sabre suffered the dual evils of being a very complex product manufactured by a company hard-pressed to deliver under difficult wartime conditions. Cases were cited where poor workmanship contributed to the already bad situation: improperly cleaned castings, broken piston rings and machine cuttings left inside the engine.

After the debacle of the early Sabres, the engine became reliable and increasingly powerful. By 1944, in Sabre V form, it became an excellent power plant. Several of the improvements incorporated into the Sabre V were relocating the outboard, overhung supercharger clutches to behind the crankcase, thus reverting to conventional in-line configuration.

The Sabre VII was similar to the V; the primary difference was the use of ADI and the strengthening of the internal components. From its 2238 cu.in. displacement a phenomenal 3500 hp was achieved at 3850 rpm. Finally, Napier testran a Sabre at 4000 hp with ADI. No other production aircraft engine has ever equaled these truly impressive numbers! 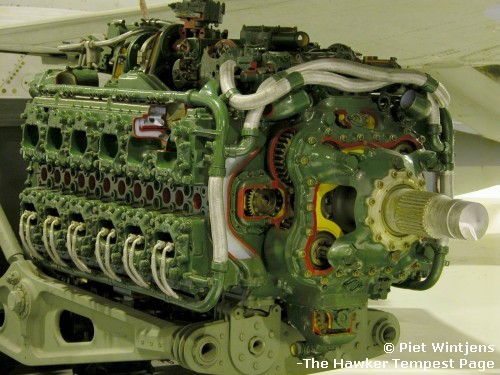 The Sabre was installed in a number of experimental aircraft and went into only two production aircraft. Both were fighters built by Hawker: Typhoon and TEMPEST. Summarizes here are only the Sabre engines in the Hawker Tempest.

The Napier Sabre - the apotheosis of the high-performance piston engine