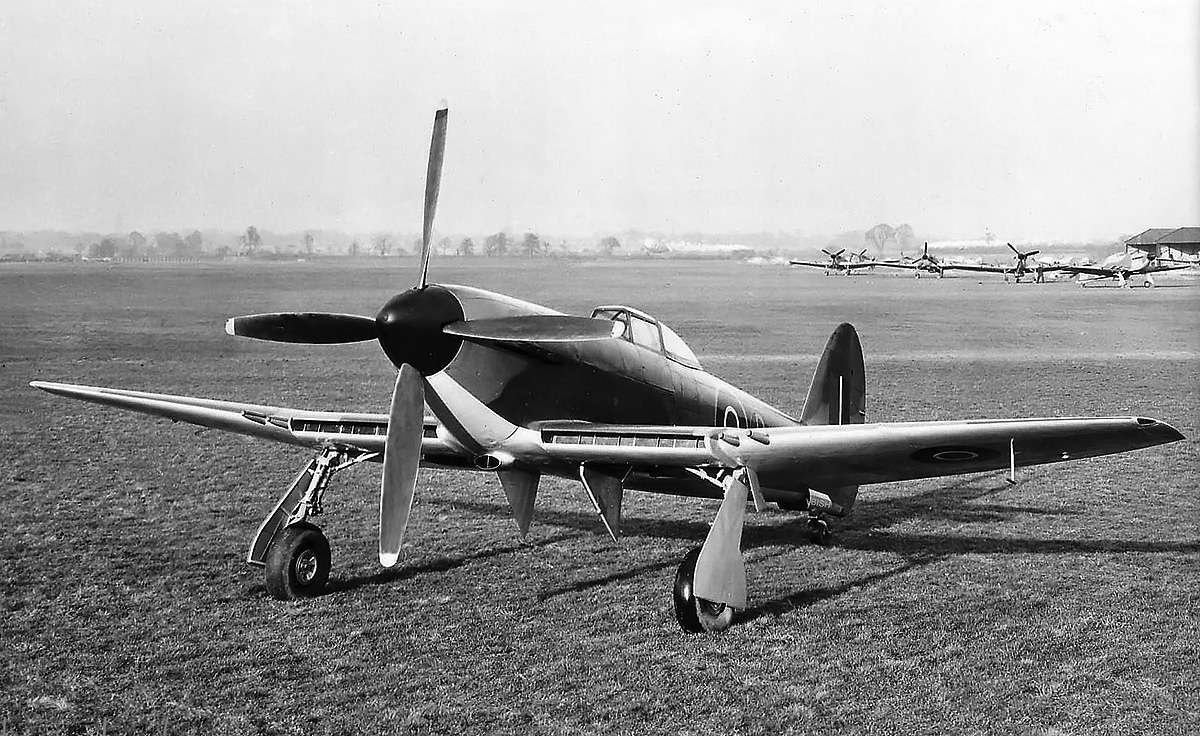 The recently completed Hawker Tempest Mk. I at Langley.

The Hawker Tempest I was a single-engine fighter of all-metal construction with a conventional taildragger layout. The fuselage was made up of four sections: engine and engine mount, center fuselage, rear fuselage, and tail. The center fuselage consisted of the cockpit and forward fuselage and was comprised of a tubular frame covered with aluminum panels. The rear fuselage was of monocoque construction. The Tempest I’s tail section, which included the vertical and horizontal stabilizers, was basically the same as that used on production Typhoons. The tail’s attachment was reinforced with “fish plates,” just like those on mid-war Typhoons. One difference from the Typhoon was that the Tempest I’s tailwheel was fully retractable and concealed by gear doors. The fuselage of the Tempest I was 21 in (533 mm) longer than that of the Typhoon because the engine was moved forward to accommodate a 91 US gal (76 Imp gal / 345 L) fuel tank installed in the fuselage ahead of the cockpit. The cockpit was accessible via a side entry door, and the pilot sat under a framed canopy. 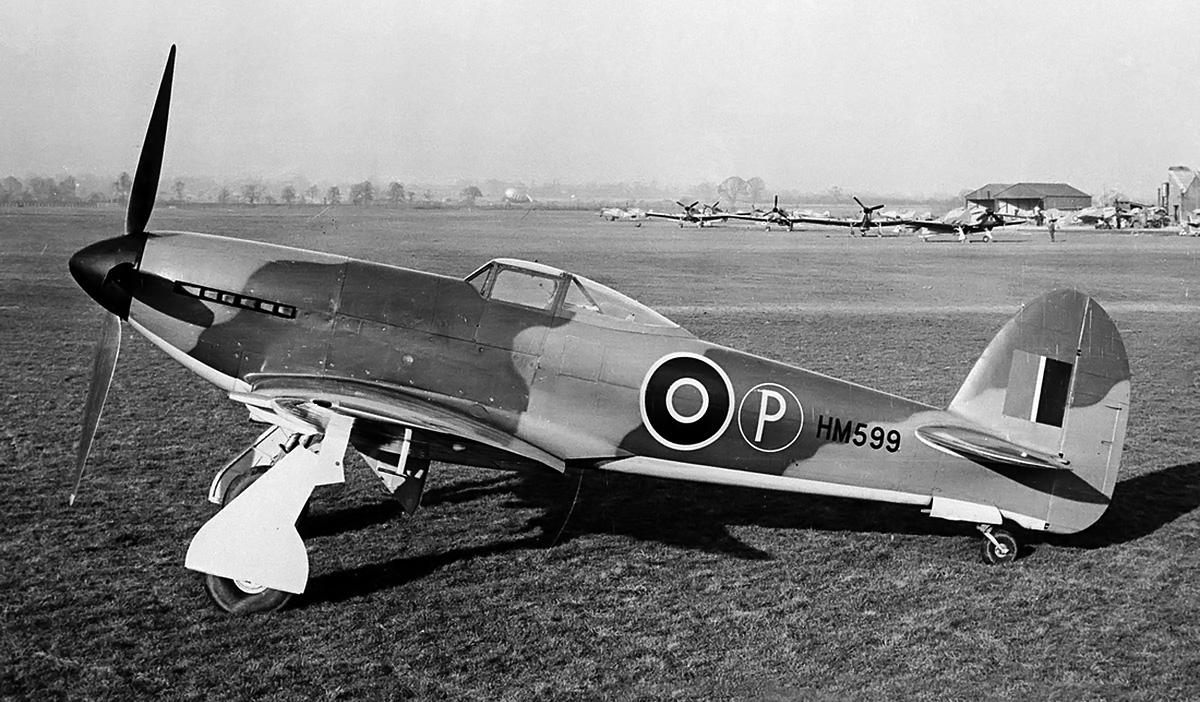 Photo left: The Tempest I with its original framed canopy and cockpit entry door on the side of the aircraft.

The Tempest I’s new semi-elliptical wing was mounted to the tubular frame of the center fuselage. The wing had two main spars and consisted of an inner and outer section. The inner section had no dihedral and housed the inward-retracting main landing gear that had been redesigned from that of the Typhoon. The landing gear had a wide track of 14 ft 11 in (4.53 m). A 34 US gal (28 Imp gal / 127 L) fuel tank was located in each wing between the main gear leg well and rear spar. Engine coolant radiators and the oil cooler were installed in the leading edge of the wing’s center section. Adjustable flaps on the underside of the wing just aft of the heat exchangers regulated coolant and oil temperatures. Each outer wing section had a 5.5-degree dihedral and housed two 20 mm Hispano Mk II cannons with 150 rpg. Each wing had a two-section, hydraulically actuated split flap and featured a large aileron. The Tempest I’s wing was approximately 5 in (127 mm) thinner at the root and 7 in (178 mm) shorter in span than that of the Typhoon and could not house all the needed fuel, which is why the fuselage tank was added. Provisions were included for the installation of a 54 US gal (45 Imp gal / 205 L) drop tank under each wing. Except for the fabric-covered rudder, all control surfaces were covered with metal.

The Tempest I’s sleeve-valve, H-24 Napier Sabre IV engine was mounted to the forward part of the tubular fuselage frame. The engine produced 2,240 hp (1,670kW) at 4,000 rpm at 8,000 ft (2,438 m) with 9 psi (.62 bar) of boost. This was some 200 hp (149 kW) more than the Sabre II used on the Typhoon. A small scoop under the engine fed air into the carburetor. The Sabre IV turned a metal, four-blade, constant-speed de Havilland propeller that was 14 ft (4.27 m) in diameter. Omitting the Typhoon’s chin radiator and relocating the cooling system in the wings gave the Tempest I a much more refined and aerodynamic look compared to the earlier aircraft. 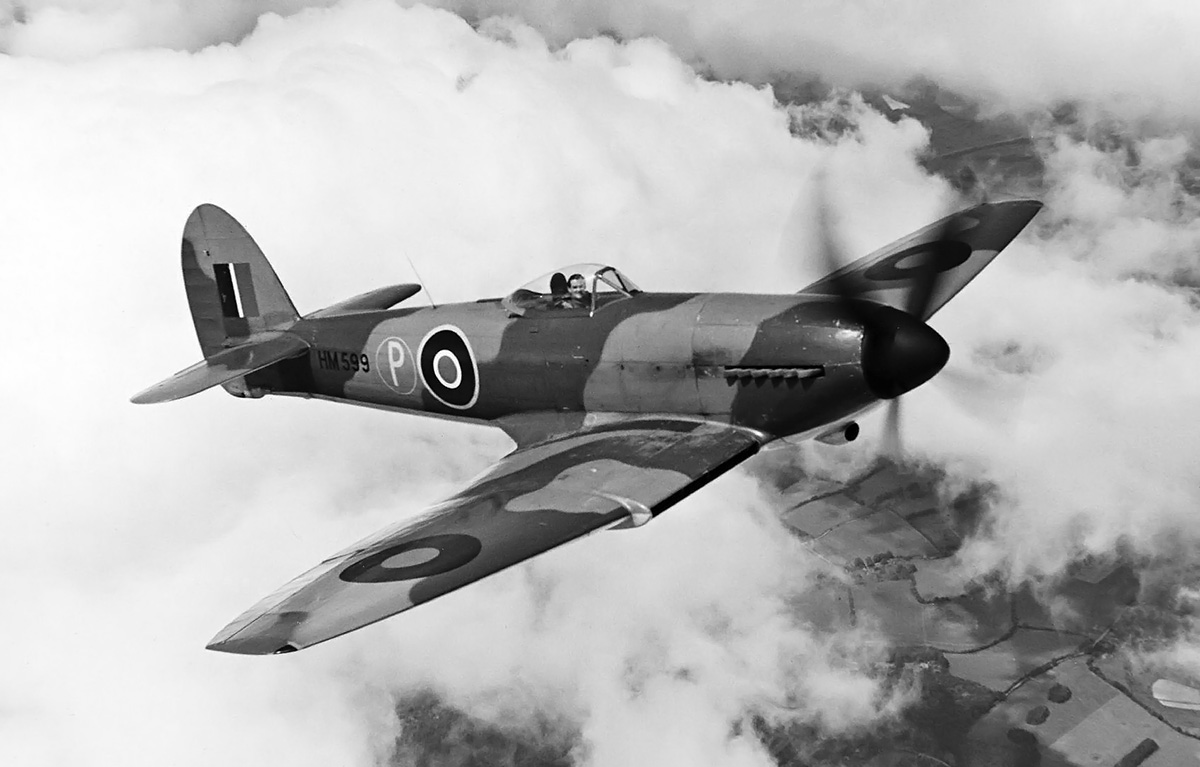 Construction of the Tempest I prototype at Hawker’s new facility in Langley, England was delayed by other war work and by the wing radiators. As previously mentioned, delivery of the Sabre IV was delayed by Napier. The Sabre II-powered Tempest V was first flown on 2 September 1942 by Lucas and gave some indication of what to expect with the Tempest I. The Sabre IV engine was delivered in November 1942, and the Tempest I underwent ground trials in February 1943. Tempest I HM599 was first flown on 24 February 1943, piloted by Lucas. Lucas found the Tempest I to have improved stability over that of the Tempest V, although pitch authority became non-existent under 110 mph (177 km/h).

Photo right: The Tempest I in flight with Bill Humble at the controls. The aircraft now has the one-piece bubble canopy, and its armament has been removed.

A new engine was installed in early March 1943, and the aircraft returned to the air on 26 March. Two days later, Bill Humble made his first flight in the Tempest I. In late April and through May, a more developed Sabre IV engine was installed, and the Tempest I was modified with a conventional, one-piece, rearward-sliding bubble canopy. It also appears that the cannons were removed, at least temporarily, at this time. The updated Tempest I flew on 4 June, piloted by Humble. Some performance testing was done during the remainder of June. The Sabre IV engine exhibited a drastic increase in oil consumption at speeds over 3,750 rpm, and the hand-built engines seldom reached 50 hours before needing to be replaced. Despite the engine difficulties, the Tempest I was praised for its performance and handling, especially at higher altitudes.

There was still life for the Tempest I. The aircraft was fitted with a 2,420 hp (1,805 kW) Sabre V engine, and the combination was first flown on 8 February 1944 by Humble. On 12 February, an order for 700 Sabre V-powered Tempest Is was received. On 9 March, the Tempest I was damaged in a ground accident involving a Hawker Hurricane. The Tempest I was quickly repaired and resumed flying on 28 March. The Tempest I order was cut to 300 aircraft in April and then converted to the Sabre V-powered Tempest VI in May. 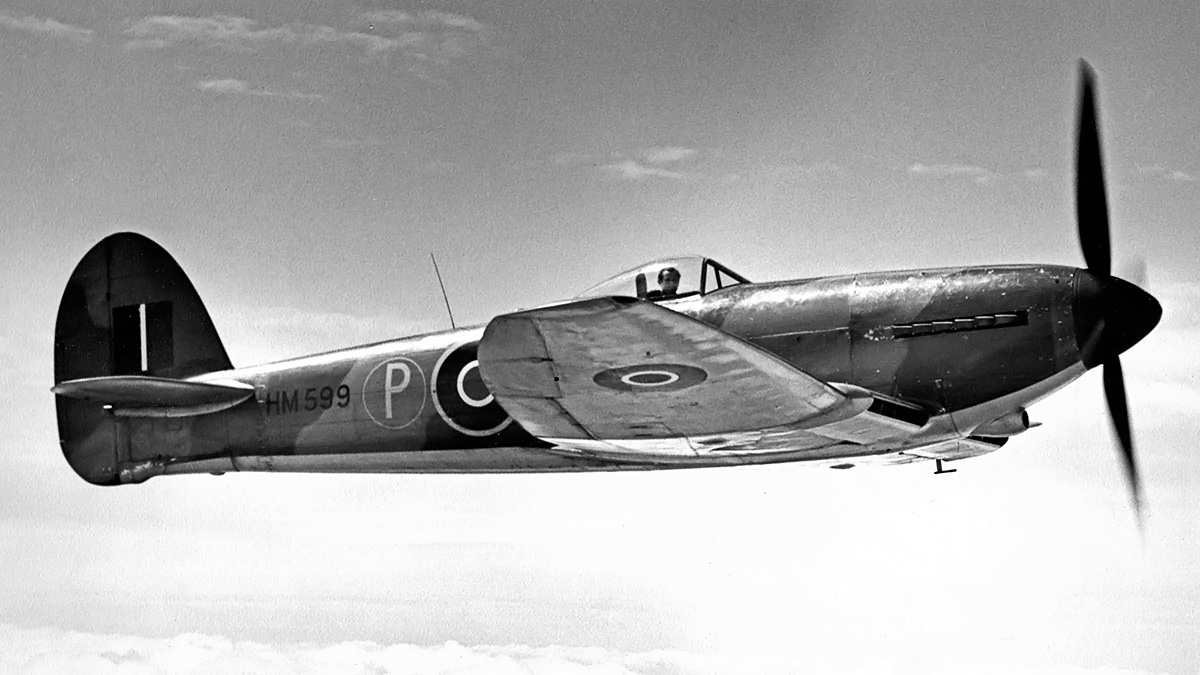 Another image of Humble in the Tempest I. The air exit gap aft of the wing radiator is somewhat visible, as are the fish plates to reinforce the tail.

Thanks to William Pearce at Old Machine Press for the permission to use his text and images on this page.

Please click the banner above to read the original article!