Development of the Tempest 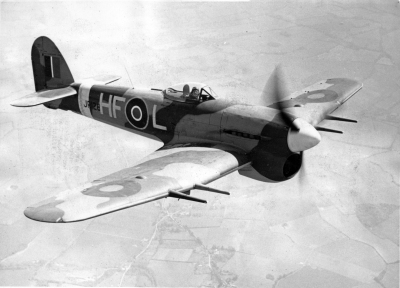 In March of 1940, Hawker initiated a number of design studies aimed at improving the Typhoon. Among these studies were ways of improving the Typhoon's high altitude performance. These involved the use of a new wing design that featured a thinner wing section and a reduced wing area. The new wing had a eliptical planform and showed a great potential for increasing performance at altitude while reducing the tendency of the original Typhoon wing to buffet at speeds around 500 mph. The maximum depth of the new wing occured farther back, at 37,5 % chord, while the thickness/chord ratio reduced to 14,5 % at the root tapering to 10 % at the tip. This meant that the new wing was five inches thinner at the root than the original Typhoon wing.

The thin wing meant that alternative space for fuel had to be found and this was achived by moving the engine 21 inches forward and inserting a 76 gallon tank between the firewall and the oil tank. The redesign also included a new undercarriage and the latest of the Sabre engine, the Mark IV.

In order to save development time, Sidney Camm decided to mate the new wing to a modified Typhoon airframe which retainde the Sabre powerplant. The RAF ordered two prototypes under Specification F.10/41 18 November of 1941 and the project quickly became known as the Typhoon II.

Hawker´s biggest problem with the new fighter was the engine. As with the Typhoon, and as a precaution, it was felt that the prototype should allow for the use of alternative engine installations. By the Spring of 1942, the various problem with the Sabre had not been fully eliminated and the company proceeded with its plans for alternative engine installations for the Typhoon II prototypes (which were renamed the Tempest during August). By this time the RAF had also revised the original prototype contract, now calling for a total of six aircraft. 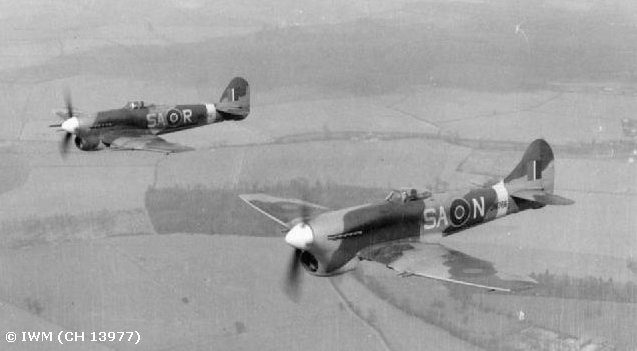 This photo shows the obvious differences between the Typhoon (left) and the Tempest (right).
The wing, tail shapes and the longer nose of the Tempest.