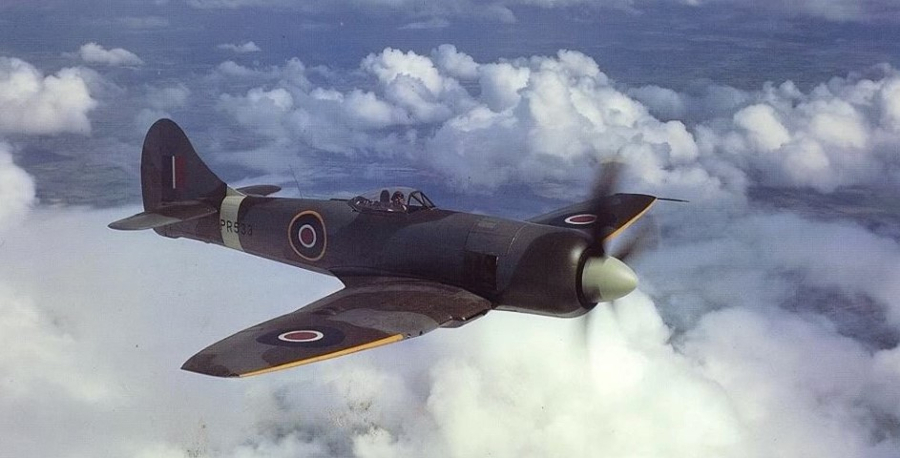 The Tempest Mk II had been intended to be powered by the 2,250hp Sabre Mk IVA in-line liquid cooled enginge. Sir Sydney Camm however felt that the radial engined Tempest Mk II would offer the ultimate in performance for the Typhoon/Tempest line and, as a result, considerable effort was made to improve the efficiency of the 2,210 hp Centaurus air cooled radial engine.

During the test flight of the engine in a Tornado prototype (HG641) the engine and oil temperatures remained constantly near the maximum allowable and there was a high amount of carbon monoxide gas in the cockpit. The RAF technicians, studying a captured Fw 190, found that the Germans had solved the problem of cooling a closely cowled radial engine. They used an annular oil cooler which was built into the leading edge of the cowling and cooled by an engine driven fan. The engine exhaust system avoided the use of a collector ring and gases were discharged through individual exhaust pipes mounted in front of exit louvres on each side of the fuselage.

Hawker engineers redesigned the Tempest II with a modified Centaurus IV, which incorporated much of the German technology. This resulted in what was probably the cleanest radial engined fighter of Second World War. The prototype (LA602) made its maiden flight on June 28 1943. It had a Typhoon-style tail unit (later changed for the standard Tempest unit) and the new one-piece canopy.
Test with LA602 reavealed that the aircraft suffered from engine vibrations. These were solved by mounting the engine on six shock absorbing rubber-packed mountings. These mounts prevented the installation of the Centaurus XII engine (which was originally intended to power production Tempest IIs) and the Centaurus V was chosen as the production power plant.

The second prototype, LA607, flew on September 18 1943. It was first fitted with the Centaurus IV and later with the Centaurus V. LA607 was from the beginning fitted with the enlarged dorsal fin and a sliding canopy and was earmarked for powerplant tests and development. Large quantities were ordered by MAP as early as September 1942. The Mk II aircraft were to be built at Glosters, but because of their production of Typhoon the Bristol Aeroplane Co was choosen. While preparation for production at Bristol was under way, Hawker switched to their own production. The first Hawker built Mk II was completed in October 1944.

Orders were raised to 330 for Bristol and 1800 for Hawker. But at the end of the war most of them were cancelled. Hawker managed to finish 402 aircraft, while Bristol completed only 50 aircraft. All production aircraft were fitted with the Centaurus V engine, the short-barrelled Hispano Mk. V cannons and the standard Mk V tail-unit. All of Bristols aircraft and Hawkers first batch were built as fighters, while the rest of Hawkers production were built as fighter-bombers with strengthened wings. The former were later modified to FB standard. The prototypes and early Hawker built aircraft did not have air filter intakes in the upper fuselage behind the engine cowling. Later production Mk IIs had also the pitot head moved from beneath the port wing to the port wing tip. 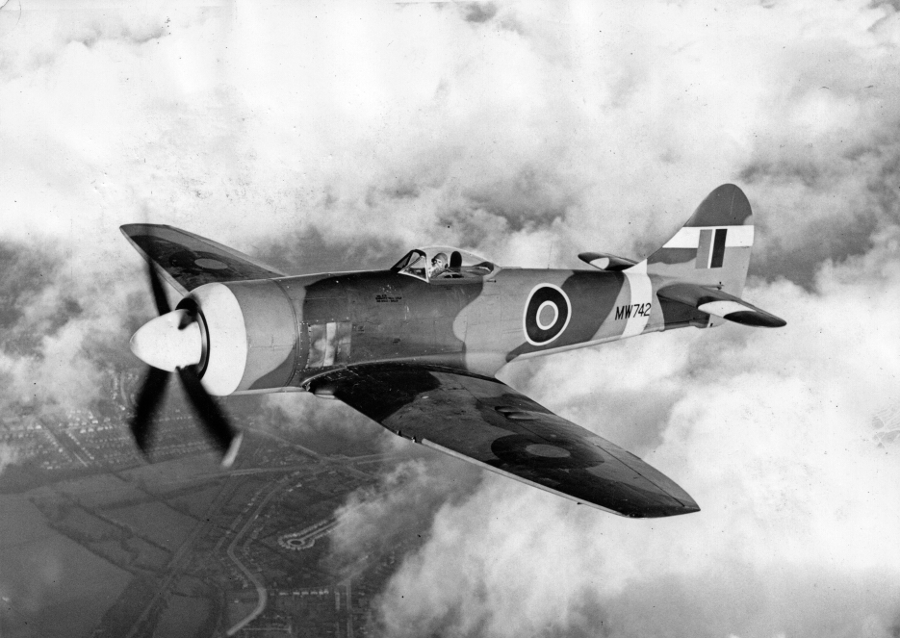 Early Hawker built MW742: No air filter intakes in the upper fuselage behind the engine cowling and the pitot head beneath the wing.