Tempest with the British Air Force of Occupation

With BAFO, as the 2nd TAF had been temporarily renamed, the Tempest was to soldier on for some years yet. The close of hostilities in May had found the greater part of 122 Wing at Fassberg, where 80 Squadron rejoined the Wing. 486 Squadron was detached at Celle, but was soon moved to Kastrup in Denmark, where the other three squadrons followed in June.

135 Wing was at Quackenbruck, from where in June 222 Squadron departed for England to convert to Gloster Meteors. The other two units of the Wing, 33 and 274 Squadrons, moved to Dedelstorf, from where 274 proceeded to Warmwell APC in July. While there it was renumbered 174 Squadron. Meanwhile the 122 Wing squadrons returned individually to various bases German bases and the Wing was disbanded.
In September 1945 486 Squadron was disbanded at Flensburg, to allow its New Zealand personnel to return home. Its aircraft were then passed to 41 Squadron. This unit remained with 124 Wing at Lubeck for the time being, joined by 80 Squadron. In September, 3 and 56 Squadrons came together again, joining 135 Wing at Dedelstorf, with 174 Squadron and the resident 33 Squadron. This Wing moved to Fassberg in October.
There were to be yet more changes to the Wings so 1 April 41 Squadron was renumbered 26 and 56 Squadron became 16. 174 Squadron was disbanded. The final Tempest V line-up was thus 123 Wing (3 and 80 Squadrons) at Wunstorf and 135 Wing (16, 26 and 33 Squadrons) at Fassberg.

During the summer of 1946 the Fassberg squadrons was re-equipped with Tempest IIs and kept them until 1949. The two Wunstorf units would carry on with their Mk Vs until converted to Spitfire F.24s (80 Squadron) and Vampires (3 Squadron) in 1948.

Tempest VI in the Middle East

The total production of the Tempest VI was 142 aircraft, more than enough to equip five RAF squadrons. No 249 received its first aircraft at Habbaniya, Iraq during December of 1946. No 6 Squadron re-equipped at Nicosia on Cyprus during December. Nos 213 (also at Nicosia) and 8 at Aden, were re-equipped during January and March 1947 respectively. The only other Tempest VI squadron was No 39 which temporarily replaced No 213 at Nicosia.
Action soon followed the arrival. Unrest in Aden, Iraq and Palestine in the turbulent post war years found the RAF holding the line pending political solutions to Britain's role in the area. Numerous ground attack sorties were flown in such diverse areas as Mogadishu in Italian Somaliland, and Eritrea in the Horn of Africa. It was over the emergent state of Israel that the last air combat for the Tempest was flown. These sorties were usually against former British aircraft flown by pilots who had been British allies a few short years ago. Casualities on both sides were few before the British Mandate ended and the RAF withdrew. By March of 1950 the Tempest VI had been replaced by Vampire jet fighters and had been withdrawn from RAF service.

Tempest II in the Far East

It was in the Far East that the Tempest II was to see its longest period of service. Two aircraft had been dispatched to India during June of 1945 and, beginning in December of 1945, a total of 180 aircraft were delivered to the RAF in India. These aircraft were used by Nos 5, 20, 30 and 152 squadrons. These units flew patrols supporting the gradually dwindling British presence in India during the period immediately before the partition of India. While most missions were of a show the flag nature, they occasionally fired rockets against hostile tribes that treatened far flung British garrisons. All four squadrons disbanded between Dec 1946 and July 1947. During their last weeks on the Indian sub-continent personnel of No 5 Squadron organized a conversion course for pilots of the Royal Indian Air Force (RIAF). Nos 3 and 8 of the RIAF took over all remaining RAF Tempest IIs in India by 15 August 1947.
The last RAF unit to use the Tempest II in the Far East was No 33 Squadron, which brought its aircraft to Changi, Singapore (from Germany) to support Operation FIREDOG, the RAF's anti-guerilla campaign against the communists in Malaya. Establishing its base at Butterworth, Malaya, the squadron began operations on 16 Aug 1947. It flew rocket and cannon strikes against communist lines of communications, villages, supply dumps and camps until 6 June 1951. On that date, the last combat sortie by a Tempest in RAF service was flown. 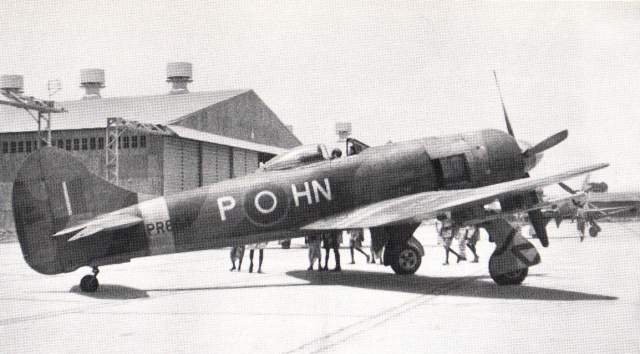