RIAF Tempests were called on for grimmer purposes soon afterwards, during the Kashmir operations during October 1947 and for some 15 months. They carried out offensive support sorties in support of the RIAF's airlift operations during that period, and provided close air support to the Indian Army. The fighting ended on 1 January 1949, by time India had received 89 additional Tempest IIs direct from England. 20 more were delivered from 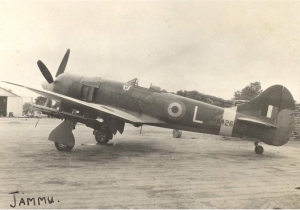 RAF stocks during 1951. Throughout its service in India, the Tempest II was quite the combat mainstay of the IAF. It served with seven squadrons, almost the entire combat element of the IAF.

However, the Tempest's service in the IAF was relatively brief. In its later years it suffered a somewhat nefarious reputation; its engine being prone to sudden catastrophic in-flight failures and sometimes bursting into flames. Several factors, including the limits to piston-engine technology which were being pushed by its Centaurus engine design, and perhaps the IAF's own willingness and determination, to push its types harder than anyone else, probably contributed. No 3 Squadron, the first Tempest operator, was also the last to use it in front-line service, retaining it until 1953. Tempests remained in service until around 1956 at Hakimpet and Jamnagar, at what were then operational and armament training units. Others continued to be used for ground instruction.

Finally, in the Tempest's last contribution to active IAF service, they were to serve as airfield decoys at operational airbases during wartime. A total of around 1,400 Tempests were built, 233 of which served in the RIAF and the IAF. There are unconfirmed rumours on Tempest airframes lying derelict around IAF airbases like Pune and Kanpur. One Tempest remains at the Indian Air Force Museum, just outside Delhi; and is in fact the subject of the fine Simon Watson photograph below.