The story of the operations of Hawker Tempest within the Royal Pakistan Air Force is one of the least known topics in the history of the aircraft. The history starts with the Royal Indian Air Force which, following partition and establishment of the RPAF, had to be shared between the two countries. Following lengthy negotiations it was agreed that Pakistan will take over 35 Tempest IIs out of Royal Indian Air Force’s inventory inherited from the RAF. Tempests were selected by the RPAF, because they were considered more suitable for harsh and hot weather conditions than liquid cooled Spitfire VIIIs & XIVs, also operated by the RIAF. Spitfires were well known for tendency to overheating in hot weather areas, even in tropicalised variants.

This also meant that Pakistan would take over two RIAF Squadrons), No. 1 and No. 9, the latter a favourite of Squadron Leader Mohammad Asghar Khan (1653). The fact that Pakistan had to take over the prime Squadron of India caused a lot of dismay in the RIAF. Nonetheless only physical assets were taken over, all the regalia was returned to India, and the Squadron was duly renumbered as No. 5 Sqn RPAF. No. 1 Sqn was reformed in India in later years. 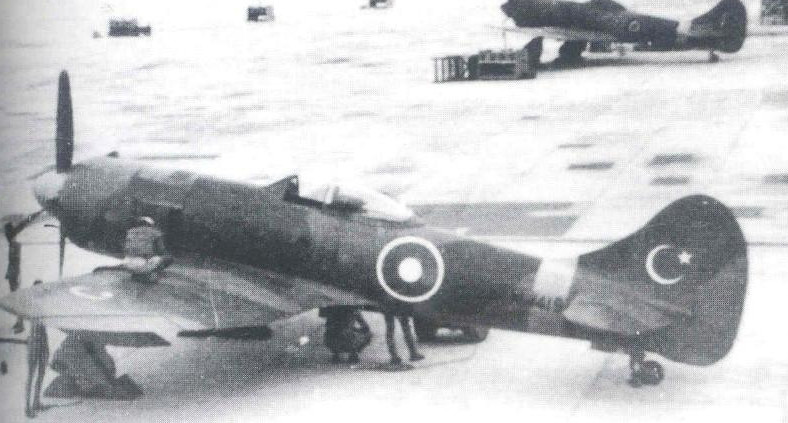 Both Squadrons were formally established on 15 August 1947 at RPAF Peshawar, then one of the main bases of RPAF. A day before, at RPAF Drigh Road, Karachi, a RIAF Tempest II MW419 (photo left) from 320 MU was painted in temporary RPAF markings and took part in Pakistan Independence celebrations. Following parade, the aircraft was delivered to No 3 Squadron RIAF at Poona. The first Tempests were delivered to RPAF only in September 1947, and each Squadron had to have 6 pilots and 8 aircraft, this due to shortage of both aircraft and personnel. They formed Fighter Bomber Wing, and maintenance was provided by Maintenance Wing at the base. The maintenance centres for both airframes (No. 101 MU) and engines (No. 102 MU) were based at RPAF Drigh Road in Karachi, more than 600 miles south of Peshawar. Here the aircraft taken over from RIAF stocks were overhauled, as they were in poor condition following RAF service and subsequent storage. By early 1949 only 28 were returned to service with serials A100-A127. Note, initially all the RPAF aircraft wore original RAF serials, but they were replaced through 1948.

The Tempests were almost immediately deployed on operations against tribesmen in Waziristan, who continued their rebellion started during the British rule. In December 1947, No. 5 Sqn provided cover for the army withdrawing from Razmak during Operation 'Curzon'. Other operations included patrolling rebellious areas, and attacking targets of opportunity and those indicated by army units. For those operations, each squadron in turn sent a deployment of two to four aircraft for periods of about three months to Miranshah. This could hardly be called an airbase, as it was limited to a short airstrip, and a pilots’ hut (or rather roof) just next to the walls of Fort Miranshah.

Tempests were not deployed in Kashmir against India, nonetheless they received quick identification markings in form of double white stripe around the tail, and similar stripes at both wing roots. At the time, RIAF Tempest wore the same camouflage schemes, and the ‘Chakra’ roundels were not easy to recognise from Pakistan’s white-green roundels in high stress conditions.

Flying at air displays and parades was another important activity, these events were morale boosters and helped to promote the RPAF amongst the people of Pakistan. No. 9 Sqn took part in an air show in Lahore on 21 March 1948 with F/L Abdul Naeem Aziz (1907), F/L Abdur Rahim Khan (2927), F/O Masroor Hosain (3001) and F/O Fuad Shahid Hussain (3002) making the formation.

On 13 April 1948, the squadron presented a smartly turned out guard of honour to the visiting Governor-General, Quaid-i-Azam Mohammad Ali Jinnah at Peshawar and two days later the Squadron pilots participated in a fly past in the honour of the Quaid's visit to Risalpur. Pilots of the squadron participated in the fly-past on Harvards in honour of the Quaid-e-Azam's visit to Risalpur on April 13, 1948.

On 14 August 1948 No. 9 Sqn carried out a fly-past over Karachi during celebrations of the first anniversary of Pakistan independence. Interestingly, the radio set in the aircraft of formation leader, S/L Abdul Naeem Aziz failed, but the display was performed according to schedule. 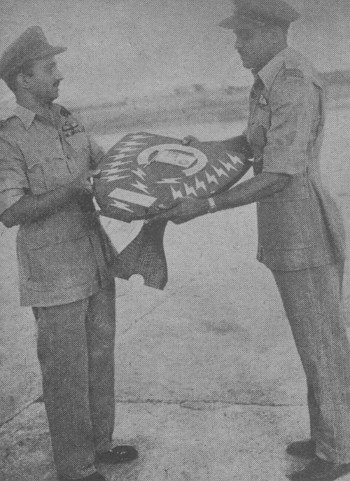 Following the expansion plan of AVM Allan Perry Keene, the first commander of the RPAF, on 1 November 1948, No. 14 Squadron was formed at Peshawar. The unit was short lived, however, following the loss of two Tempests, the cease-fire in Kashmir, and the change of C-in-C of the RPAF, the Squadron was disbanded on 15 January 1949 and number plated. The new situation resulted in major changes in training patterns, as the new commander, AVM Richard Atcherley stressed for training at the cost of combat strength. Extended courses had to be undertaken, with each graduate being trained on Tempests in the Conversion Squadron at RPAF College of Flying Training, Risalpur, regardless of future assignment to fighter squadron or not. The Conversion Squadron operated three Tempests. Additionally, AVM Atcherley arranged to have a single Tempest assigned for personal use, and based at RPAF Drigh Road. He was often seen overflying Karachi boosting the morale of both civilians and RPAF personnel.

In May 1949 the contest for the first Inter Squadron Armament Trophy known as Perry Keene Trophy took place. In a rivalry between No. 5 and No. 9 Squadrons, the latter had the upper hand. The victorious team consisted of S/L Aziz ur Rehman Khan (2358), F/L Fuad Shahid Hussain (3002), F/O Imtiaz Hussain Khan Agha (3406), and F/O Stefan Tronczyński (841).

Back in 1948 Pakistan acquired 24 Tempest struck off RAF charge and overhauled by Hawkers. These aircraft started to arrive in March 1949 and were immediately assigned to combat units. They were given serials A128-A151.

At least four of the remaining ex-RIAF aircraft were returned to service during 1949, and assigned serials following the Hawker’s batch aircraft, the highest known being A156. It seems they were overhauled using newly acquired spares, and possibly cannibalised parts of written off aircraft, prior to being assigned to combat units.

Photo right: A146, previously PR897, photo taken during the delivery.

The acquisition of the aircraft coincided with recruitment of the ex-Polish Air Force airmen, who remained in exile in the UK. Nearly 70 airmen and aircrew were selected, those including a fair number of fighter pilots. Due to change of RPAF policy, only a few of them made it to fighter units, the rest being dispersed between various units to fill vacancies. Most of them left Pakistan by the end of 1949.

With an improved technical and personnel situation, No. 14 Sqn was reactivated on 16 December 1949 under the command of Squadron Leader Julian Kazimierz Żuromski (835). This meant that the Fighter Bomber Wing exceeded in numbers a wartime RAF fighter Squadron! The squadron left for Miranshah on 24 March 1950 on its first operational deployment against insurgency of the Faqir of Ipi.

There is very little information available on accidents and losses of RPAF aircraft. One identified fatality was P/O Ghani Khan (865) of No. 9 Sqn, who was killed on 24 May 1950, when performing a split-S dive at high altitude his Tempest ran into high speed compressibility effects, the pilot lost control, and the aircraft broke up.

Starting from October 1949 Pakistan took delivery of the first batch of 50 Sea Fury fighters, which ultimately replaced Tempests in combat units. The first Squadron, No. 9, converted onto the new aircraft in July 1950, but due to a shortage of Sea Furies, it flew Tempests once again from November 1950 until February 1951. About the time, all fighter bomber squadrons phased out their Tempests.

The final batch of 21 Tempests was acquired from RAF stocks in Malaya starting in November 1951 and ending in November 1952. Following a long period in storage the aircraft were in bad condition and at least three were lost during the delivery flights. This deal was widely disputed in Pakistan, as those aircraft were deemed unnecessary. The highest known serial is A165.

Tempests, deemed as a reserve, were stored at Equipment Depot, RPAF Chaklala, and some of them continued service for a while in the Conversion Squadron at Risalpur, and were then relegated to second line duties like target towing or as instructional airframes. In September 1953 No. 12 Heavy Bomber Squadron was converted into Composite Squadron. In the new establishment, the Squadron had three flights: Air Headquarters Communication Flight operating Dakotas and a single Viking, Target Towing Flight with Tempests, and Heavy Bomber Flight flying Halifaxes. The last target towing Tempests were seen in Pakistan in 1958. None survives to the present day.

Tempests, the first combat aircraft of Pakistan, were remembered as good aircraft, but tricky to fly due to tendency to swing on landing. Some pilots complained about condition of the aircraft and crude finish of wartime production standards. Centaurus engines turned out to be temperamental, and caused a lot of problems, partly due to a lack of spares and proper servicing. The replacement Sea Fury was found to be a superior aircraft in all respects. The last surviving Sea Furies remained in combat use until 1964.

It is likely that the original 35 aircraft inherited from RAF stocks were painted in RAF colours. At the time the RAF used two schemes: the Day Fighter Scheme, with Dark Green and Ocean Grey disruptive pattern with Medium Sea Grey undersurfaces, and the Silver scheme with all surfaces painted silver. However there is no evidence of the use of the Silver scheme on Pakistani Tempests.

The 24 aircraft that were delivered from Hawker were painted in Desert Scheme of Dark Earth and Middle Stone disruptive pattern with Azure Blue undersurfaces, and Azure Blue spinner. Due to infrequent painting, repairs, and wear, aircraft started to look rather worn toward the end of their service. It seems after 1950 following the withdrawal of Tempests from operational units, the aircraft were gradually repainted in silver. Target tug aircraft had undersurfaces painted in a single colour, possibly yellow.

National markings consisted of the Pakistani roundel, white and green with yellow outline on wings and fuselage, and on the tail a green square with yellow outline and a white crescent with star, on both sides of the aircraft; the crescent faced to the rear on both sides. Serials were painted in black on fuselage sides and on wing undersurfaces in typical RAF pattern of the time. They were introduced on 6th December 1947.

At the same time quick identification markings were applied in the form of double white stripe around the rear fuselage, each band formed into a chevron on the fuselage sides (pointing forwards), and also double white chevrons at both wing roots and pointing towards the fuselage. There is a photo of a Tempest showing single black stripe at both wing roots, but it is uncertain if it is variation of the above marking or unrelated. Starting from 1949 those markings were gradually removed.

Spinners were painted in squadron colours, No 5 Sqn dark blue, No 9 Sqn red, No 14 Sqn white, left in factory colour or repainted, possibly with one of camouflage colours. No squadron emblems, popular on Sea Furies, were noticed on Tempests. There is a single photo of a Tempest showing an emblem on the cowling, which cannot be tied with any unit, possibly a personal marking.

Squadrons used code letters in white in front (to nose) of the fuselage roundels and in black on front bottom cowling. Later, in 1949, with the removal of identification stripes from the tail, code letters moved after the roundel (gradually on old aircraft, and immediately on newly delivered ones). It seems that white section on bottom of the front cowling was added as a background to the code at the same time, but no clear rule could be deduced. Only some aircraft received codes, probably those assigned to particular pilots, even if flown on availability basis. Favourite letters were used, eg. M for S/L ‘Bertie’ Mirza.

Commanders of Tempest Squadrons of the RPAF

Nominal Roll of pilots of