The Greatest Engines of All Time by LJK Setright

One of the highlights of ETi's Unusual Engines series, for the late LJK Setright, there was no better motor than the Napier Sabre.

Its history was brief, its performance was always questioned by heavy-handed censorship, its makers were treated badly by government and industry alike, and a vicious rumor-mongering operation sought to play down its achievements. It only featured in two types of operational aircraft, both of which left something to be desired; but with it, those two applications achieved things that no other aircraft could - such things as might only be achieved by a combination of overwhelming power with exemplary reliability. World War II might have taken very different turns without it but despite this, Rolls-Royce, having failed to match it, even attempted to have its production stopped.

Single-sleeve valves enabled a higher compression ratio to be used, or a higher supercharge pressure, and would also tolerate a higher admixture of lead in the fuel. With no exhaust poppets to grow incandescent, and with freedom to form a beautiful combustion chamber shape, detonation could be postponed even further. Coefficients of flow through the ports were greater than past poppet valves, more back pressure could be tolerated, and the sleeve actually reduced bore wear because it was always moving relative to the piston - even at top and bottom dead centers - and so the lubricating oil film was always energized. The shallow cylinder heads allowed the engine to be compacted within less frontal area, and the motions of the sleeves and their driving mechanism were altogether less vicious and limiting than the jerking and hammering of poppet valves.

Add the particular virtues of the small-cylindered Napier layout, contributing high crankshaft rates and vast breathing capacity in relation to the physical size, and with all bearings (thinwall shells, to be copied by Vandervell), and shafts fully supported in a naturally rigid structure - the result could hardly fail to be a prodigy. So when, after nearly five patient years, Napier was grudgingly allowed to type test the Sabre at 2,O5Obhp and 3,70Orpm, it was already capable of very much more. Throughout its life it was dogged by this discrepancy between the truth and what was allowed to be published. The Air Ministry made sure that Rolls-Royce was kept fully informed of the project, enabling it to wage a campaign of suppression that varied from slander to sabotage.The R-R people could be dangerously nasty when embarrassed. Some consolation came after Lord Beaverbrook was made Minister for Aircraft Production in 1940: he saw the promise of the Sabre and commanded facilities for its manufacture. It might never be built in huge numbers, might forever be handicapped by such things as the sequestration of all the best and most suitable airscrews for use only on R-R engines, might forever suffer from the lies spread about it; but it would be built, and flown, and strike fear into the enemy as no other engine ever did. 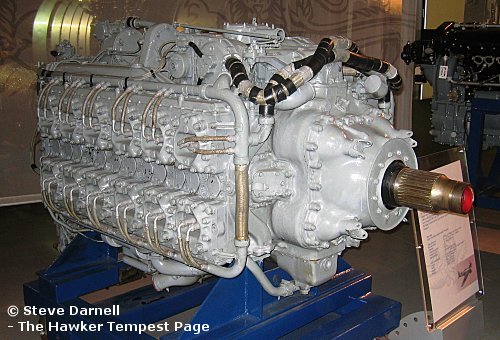 To this day it is fashionable to doubt the supposed power of the Sabre. My information came from the wartime R&D department at Napier, and refutes the popular opinion. In its first production form, for the Hawker Typhoon, the Sabre was modestly rated for combat at 2,615bhp at 3,850rpm and about 151b/in2 boost. Later it was given water/methanol injection, raising that to 3,055bhp at 171b/in2 - still a shadow of its real ability, for it was known to be capable of a sustained 3,750bhp. That was actually the most it was ever set to deliver in service, though there had been experimental engines built (featuring much higher boost from a three-stage supercharger - the production Sabre was quite modestly boosted, never being envisaged as a high-altitude engine) that it could deliver 5,5OObhp at 4,20Orpm, running at a boost of about 451b/in2 and a b.m.e.p. of 4671b/in2.
Nor was that 3,750bhp service a typical combat rating that might be maintained for only 15 minutes. It was a figure that could be sustained hour after hour, day after day: Napier tested the Sabre at that rating for 175 hours non-stop. The company's usual endurance test was more varied: 10 hours at cruise rating, three hours at climb rating, one hour at take-off power, and one hour at combat maximum, with the whole 15-hour cycle being repeated non-stop over and over again.

What this perhaps proved incidentally was the greater suitability of the sleeve valve for a liquid-cooled engine than for the air-cooled type, for Bristol was never able to display such results.