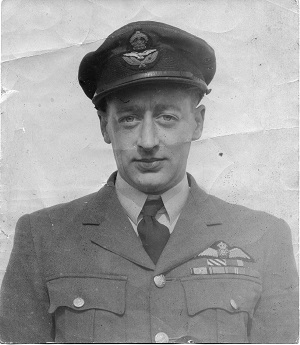 On 20 October 1943 he was posted to 56(Punjab) Squdron, first flying Hawker Typhoon and then Spitfire Mk. IX. The squadron received it's first Hawker Tempest Mk. Vs on 25 June 1944. Harry Shaw made his first flight in the Tempest the next day, in his log book he wrote the note "Wizard Kite!!"

During the summer 1944 he claimed 9 and one shared V-1s. He continued to operate with the unit over Europe (from Grimbergen and Volkel), claiming several victories over aircraft. On 16 January 1945 his Tempest US-G (EJ548) was hit by debris during a strafing attack and he force-landed south-east of Doetinchem spending the rest of the war as PoW.

Back in England he wrote this account of his final Tempest mission of the war:

"Airborne approx 11.00 hrs on Tuesday, January 16th 1945, flying No.2 to F/Lt Ross, "A" Flight Commander. Object - weather recce + targets of opportunity in the Munster area. Weather poor, 8-10/10 at about 1500 to 2000 ft, with a thick haze on the deck.
At 11.40, Red 1 saw a train and went down to attack, self following as Red 2. Could not observe full result, but saw strikes on engine, tender and first few trucks. Would say that the claim is "1 loco damaged". Whilst pulling up from the attack I felt a hefty bump, and the stick jerked violently in my hands. I looked around and saw a large hole through starboard stabilizer. Realised that flak had probably touched one of the control wires. I tested the controls and found them serviceable, checked engine temperature - all OK. Broke away from a large town, and judged it to be Munster. Informed Red 1 of my hit and we set course for base. About 5 minutes later Red 1 saw a loco and did a dive-bombing attack on it. I held back and went in on the deck. Red 1 had a few hits on the tender. I opened up at about 500 yds and saw all my strikes on and around the firebox and in the cab. As I passed over, the loco exploded with a large cloud of steam. I felt another bump and broke up to rejoin Red 1; at about 3000 ft I saw a stream of glycol from the port stubs, and saw that the coolant temp was going up smartly. Informed Red 1 and steered 270 degrees for base. Managed to make 11,000 ft before engine began to cut. Glycol temp off the clock. Went to channel C and asked for emergency homing. Control was very calm, and inspired lots of confidence.

Engine packed up, but breaking in every 30 seconds or so for a few seconds, which prolonged the glide. Finally at 2000 ft I picked the best field I could owing to the ground mist (i.e. the one directly below me) and made an approach turning 180 degrees to east. Entered mist at 500 ft and hoped I was heading for my field. Gliding turn from 150 to 160 mph - kite stable and no tendency to flick. Hydraulics u/s. Skidded round two clumps of trees. Broke of a tree with starboard wing. Removed some telephone wires and dropped a wing! Corrected and belly-landed on the snow, pulling up just short of a hedge and ditch. Harness held light and R/T was OK to receive. Heard Red 1 inform control that he lost sight of me. Elbows bruised, very dazed but otherwise unhurt. Thought I might have landed just inside occupied Holland so climbed out and looked round. Two men, civilians, followed by a third ditto came running up. Asked no 1 if he was a Hollander and received affirmative answer. Second indicated that he was a Pole. Third man beckoned me towards a farmhouse. I followed him, entered the house and was given a seat by the stove. Bloke then informed me that he was a German and locked the door after sending a messenger away on a cycle." 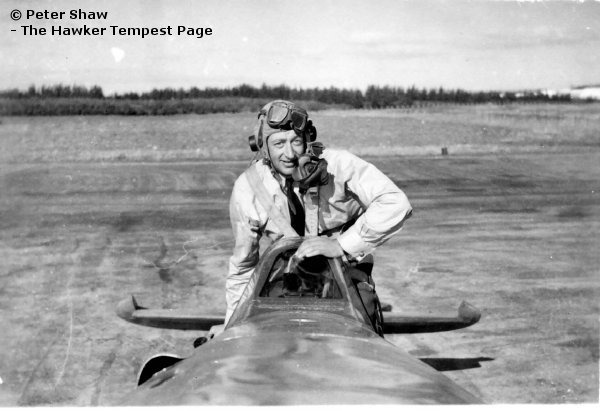