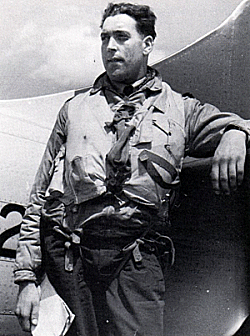 Alan Dredge was born 4th February, 1918 at Foleshill. Son of Sydney and Ada Dredge, of Holbrooks.

On recovery he flew Typhoons with 183 Sqn during 1943. In October he was posted to command 3 Sqn, converting from Typhoons to Tempests during February 1944. He remained with 3 Sqn until August, when his tour ended. He was promoted Wing Commander late 1944.

Dredge was killed in a flying accident in a Mosquito on 18 May 1945.

In May, 1941, this officer was pilot of one of a formation of six aircraft which were engaged by eighteen Messerschmitts. Fighting his way out, the officers attacked the enemy bombers which the Messerschmitts 109's were escorting. In the ensuing combat his aircraft was set on fire. It spun down from 22,000 feet to 14,000 feet at which point the officer skillfully regained control and executed a successful crash landing, although he had been badly burned. During the time he has been with 183 Squadron, this officer has displayed outstanding courage and enthusiasm.

This officer has led the squadron on a very large number of sorties, involving attacks on a wide range of enemy targets. Shipping, airfields, locomotives and various other targets have been most effectively attacked. Throughout these operations, Squadron Leader Dredge has displayed inspiring leadership, great courage, and determination, qualities which have contributed materially to the success obtained.