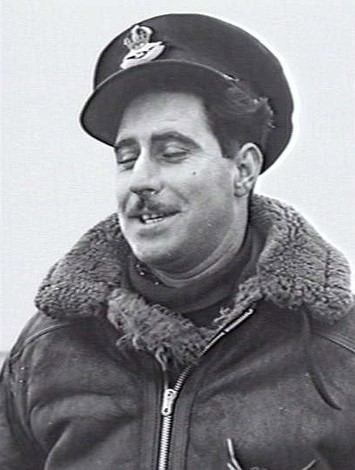 Valton Leslie John "Val" Turner was born in Sydney on 4 October 1920. Educated at St Joseph's College and Grafton High School, he finished school in 1937. He then attended Armidale Teachers College, obtaining his Teachers' certificate in 1939. Popularly known as 'Val', he was teaching at Gloucester NSW before he enlisted into the Royal Australian Air Force (RAAF) on 11 October 1941 and allocated the service number 420363. Val was accepted for air crew training with 8 Elementary Flying School at Narrandera NSW.

After further training in Canada with the Empire Air Training Scheme, and in the United Kingdom with several Operational Training Units, he was posted to No. 56 Squadron in March 1944. He flew Tempest Mk. V on operations over Southern England and Western Europe. While with 56 Sqn Turner shot down two V-1 flying bombs, two Messerschmitt Bf 109s and two Focke Wulf Fw 190.

In June 1945 Turner was awarded the a DFC for having flown a large number of operational sorties including meteorological and shipping reconnaissance, convoy patrols and bomber escorts, including attacks over Germany and the battle area, destroying enemy aircraft and damaging the German's mechanical transport rolling stock and locomotives. With the cessation of the war he discharged from the RAAF on 6 December 1945. Turner was the top scoring Australian Hawker Tempest pilot and the only one awarded a DFC.

Turner resumed his teaching career, but with the onset of the Korean War, he volunteered again for flying duties with the RAAF on 25 November 1951. Promoted to flight lieutenant, and allocated a new service number of 023862, Turner was assigned to the veteran 77 Sqn RAAF. He flew Gloster Meteor Mk8 fighter aircraft on 140 air combat and ground attack missions with 77 Sqn between November 1951 and June 1952, while it was attached to the United States Air Force 4th Fighter Interceptor Wing. On more than one mission, he brought his heavily damaged Meteor back, narrowly avoiding death on several occasions.

Turner was awarded a Bar to his DFC, and received this award from Her Majesty Queen Elizabeth the Second at Government House, Sydney on 6 February 1954. In addition to this Turner was awarded the United States Air Medal (US AM). Turner continued serving in the RAAF after the Korean War, in several roles such as an Air Defence Officer, and working with the Project HUBCAP air defence system for the RAAF, both in Australia and the United Kingdom. He was promoted to honorary wing commander upon his retirement from the RAAF on 28 June 1975.

On 25 August 1977 Valton Turner died in Newcastle, NSW. A memorial flypast of his funeral was conducted by fighter aircraft of the RAAF, as a mark of respect for his many achievements over his long and distinguished career.