Alexander Ewen "Ben" Gunn was born on 24 June 1923 and educted at Whitehill School Glasgow. In 1942 he attended the RAF Staff College at Cranwell and then went to No. 501 Sqn flying Spitfires. From No. 501 Sqn Gunn went on to No. 274 Sqn flying Tempest Mk. V. Just before VE day 1945 he was posted as an instructor on Tempests with 56OTU.

In June 1945 Gunn was posted to join the Aeroplane and Armament Experimental Establishment (A & AEE) at Boscombe Down, involved with the intensive testing of the Tempest Mk. II. He went on to become a graduate of the Empire Test Pilots’ School ) ETPS in 1948, on No.7 Course, the first to be completed at Farnborough. 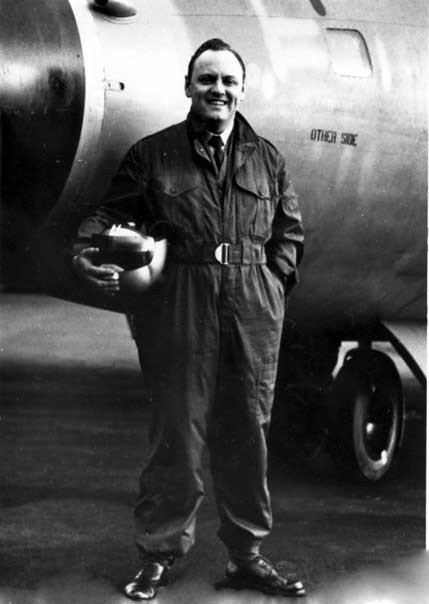 Gunn was then appointed as Chief Test Pilot for Boulton Paul Aircraft Ltd, a position he held for 17 years. With Boulton Paul Gunn was involved in the Test Flying and maiden flights of many aircraft types, two of which were the little delta aircraft the P111A and P120. Gunn became the first pilot to eject (and inverted) from a delta aircraft, when the P120 lost the port elevon in flight.In 1957 he flew the 'Tay' Viscount Flying Test Bed, where he was the first to fly by wire on all three surfaces.