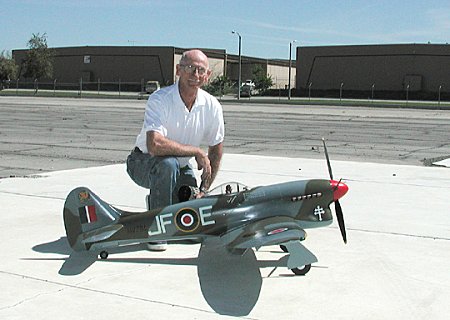 The model is a 1/7th scale replica of the machine flown by the French ace Pierre Clostermann.

It is scratch built, based on three-views by A. L. Bentley, resulting in 70.6" span with approximately 900 sq. in. It weights 13 lb., 5 oz. It is powered by a brushless "inside-out" ACTRO 40-5 motor controlled by an Actronic 70-32 with a 28 cell pack of NiMH 3300 cells. The prop is APC 16-10-E that averages 6000 RPM draining 26 Amps at take-off. Flying a "scale profile" that includes a pair of touch-and-go it stays approximately eight minutes in the air with one minute of reserve power. Spring Air retracts for the main wheels, home made tail wheel retract.

Molds were made for the nose of the fuselage, the spinner and the tail wheel doors. Details like the exhaust stacks and cannon fairings were made by vacuforming over home-made forms. Construction of the fuselage is Styrofoam mounted over a balsa skeleton, shaped and fiberglassed joining it with the carbon molded nose section. The wings are made with hot wired Styrofoam reinforced with carbon and vacuum-bagged with 1/20" contest balsa. The tail feathers are also Styrofoam vacuum-bagged with 1/32" balsa properly reinforced with carbon where needed. The whole model is covered with 1/4 oz sq. yd. fiberglass and finished with Brodak paints. Control is by Airtronics Stylus transmitter operating seven servos for separate ailerons, flaps, elevator, rudder and retracts.