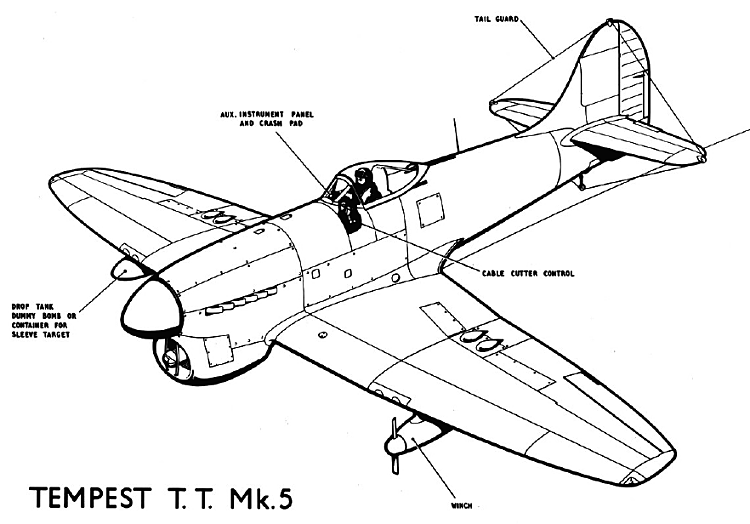 1. The Tempest TT Mk.5 is a single seat low wing monoplane with a fully retractable alighting gear, converted from a standard Tempest Mk.5 aircraft for target tug duties; it is powered by a Sabre 2B or 2C engine which drives a Rotol or de Havilland metal, four-bladed variable pitch left-hand tractor propeller. The cockpit has a sliding hood which is moved aft for entry or exit. In an emergency the hood, and a panel on the starboard side of the cockpit may be jettisoned. The flying controls are of the conventional stick and rudder type; the seat is adjustable for height and the rudder bar for leg reach.

2. The fuselage is of composite construction, the engine mounting and centre fuselage being formed of steel and light-alloy tubes covered with fixed and detachable metal panels, while the rear fuselage, including the tail end with integral fin, is of metal monocoque construction.

3. The stressed-skin cantilever main plane consists of port and starboard wings attached directly to the fuselage; the wing undersurface is horizontal for approximately one-third of the span and the outboard portions rise to form a dihedral angle. The ailerons are of modified Prise tyre with mass-balance and the hydraulically-operated split flaps extend from the wing root to the inner ends of the ailerons.

4. The non-adjustable cantilever tail plane comprises two separate, interchangeable half planes bolted to the fuselage sides. The rudder and elevator are mass-balanced. Rudder and elevator tabs are controllable from the cockpit.

5. The alighting gear consists of the two main wheel units which retract inward and slightly backwards into wells between the wing spars, and a tail wheel unit which retracts forward into the fuselage, the operations being effected hydraulically. Mechanical locking and electrical indicating devices are provided, as well as a warning lamp. Each main wheel is carried on a stub axle of an oleo-pneumatic shock absorber strut and is fitted with a pneumatically operated brake, actuated by a lever on the control column; the brakes operate, differentially in conjunction with the rudder bar. The tail wheel is fitted with a twin-contact self-earthing tyre and is carried on a fully-castoring, oleo-pneumatic shock absorber strut; the wheel is self-centring during retraction.

6. The main fuel tank is carried in the fuselage just aft of the forward firewall; two further tanks are housed, one in the inner portion of each wing between the main spars; there is also a nose tank in the leading edge of the part wing forward of the interspar tank.

7, The oil tank is installed in the top of the fuselage, immediately aft of the rear firewall. An annular oil cooler fits into the centre of the coolant radiator which is hung beneath the engine mounting and is enclosed in a low velocity cowling fitted with a hydraulically operated shutter controlled from the cockpit. A hole in the centre of the coolant radiator allows air to pass into the air intake, the forward end of the hole being provided with an air cleaner controlled by a lever in the cockpit.

8. This aircraft does not carry drop tanks, guns, bombs, rocket projectiles or camera guns although the relevant fixed parts remain embodied in the aircraft. Nos. 3 & 4 part ammunition tanks are removed and the gun bay heating pipe from the engine is blanked off and the Y piece in the fuselage connecting this pipe to those at the wing root is removed. The port wing gun heating pipe is utilised as a duct for the winch electrical control cables.

9. A target which may be winged or a low drag sleeve type, is towed from a type G winch fitted to the undersurface of the port wing; the cable running inboard to a cable cutter situated on the underside of the fuselage below the cockpit and then trailing rearwards. To counteract the drag of the target and winch, the starboard wing is ballasted with an empty drop tank or dummy bomb although at a later date this ballast may take the form of a container, from which a sleeve target could be streamed after the aircraft is airborne. The tail end of the aircraft is protected from the towing cable by a guard in the form of a tensioned cable both ends of which are attached at the top of the fin and the remainder, located in the three pulleys, one on each tip of the tail plane, and the other on a syring loaded post attached to the fuselage just forward of the tail wheel doors. The aircraft carries approximately 6,000 ft. of cable, and is payed out from the windmill driven winch fitted to the wing by bolts which pick up with the standard bomb carrier attachment points; the gap between the winch and the skin being sealed by removable fairings.

To prevent fouling the tail wheel during take off, the cable is located in a spring clip mounted on the starboard side of the tail wheel strut and when airborne the cable is automatically freed from the clip. In an emergency the trailing cable and target are quickly detached from the aircraft by means of the cable cutter which is controlled from the cockpit. Normal release of the target prior to landing is effected automatically by a quick release mechanism on the cable just forward of the target, coming into contact with a shock absorber fitted to the cable cutter. This shock absorber is fitted to stall the winch after release of the target. The winch is controlled electrically by switches mounted on an auxiliary instrument panel fitted aft of the windscreen. The panel is fitted with red-lighting for use during bad light. "Pay-out" and "reel-in" speeds are controlable and a footage indicator and windmill speed indicator are also fitted.

10. The radio installation, carried behind the pilot, includes standard transmitter receiver, beam approach, and I.F.F. installation. A retractable landing lamp, controlled from the cockpit, is fitted to the undersurface of the port wing; a first-aid outfit is stored on the inner face of the radio access panel. An engine driven generator supplies all the electrical services. An oxygen bottle is carried on the part side of the fuselage immediately aft of the pilot's scat.