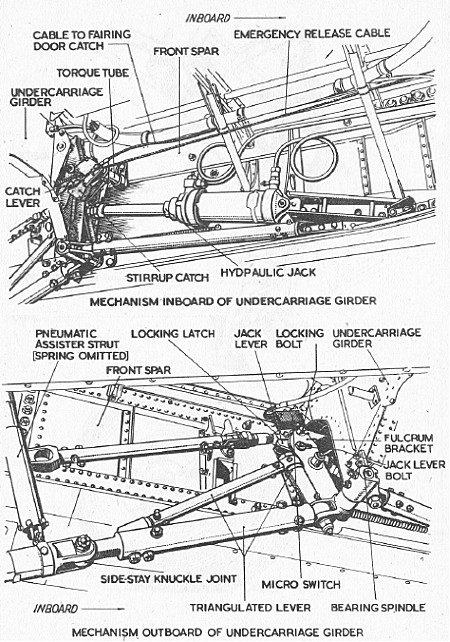 LATCH AND CATCH GEAR:
The latch and catch gear is mounted on the front spar and the undercarriage girder. The latch gear is the mechanism nearest to the front spar and its function is to lock the undercarriage side stay rigidly in the "down" position. The catch gear supports the undercarriage in the "up" position. Both gears are operated by a jack lever which is common to both, the operation being automatically carried out by the movement of the hydraulic jack.
The catch gear consists of a torque tube carried in two bearings on the undercarriage girder and the front spar, on which are bolted two levers which operate the stirrup catch and a shackle connected to the fulcrum bracket of the side stay assembly. The main stirrup catch is also mounted on this torque tube but is free to revolve on it, and is spring-loaded to prevent accidental opening. A small lever connected by a Bowden cable to the fairing door catch is pivoted on the main stirrup catch.

SAFETY DEVICES:
A composite undercarriage and tail wheel indicator is situated on the pilot's instrument panel on the port side. It is provided with three lamps which are controlled by three micro-switches, mounted at the locking latch, the stirrup catch and the wheel door landing respectively. When the wheels are down, the plunger of the micro-switch incorporated in the locking latch is depressed by the bolt on the fulcrum bracket. This micro-switch overrides the main stirrup catch forcing it open against the springs. At the limit of the upward movement of the leg the stirrup rounds the apex of the stirrup catch and the latter shuts home by means of the springs, thus locking the under-carriage up. As it rounds the apex of the stirrup catch the stirrup bears against the small lever, thus pulling over the catch that locks the leg fairing, allowing the landing on the latter to pass the catch. As the stirrup finally rides home and is locked by the catch gear the small lever closes once more and allows the catch to lock under the leg fairing. In addition, a small spring-loaded catch on the wheel fairing door locks the latter up by engaging with a landing on the leg fairing.

SHOCK-ABSORBER STRUT:
Three types of shock-absorber units can be fitted to this aircraft, types C.8625, C.9759 and A.9835. Types C.8625 and C.9759 are completely interchangeable in the undercarriage leg assemblies, but type A.9335 can only be fitted to leg assemblies of issue 29 or later unless Mod. No. 126 has been incorporated.

WHEELS AND BRAKES:
The cast Elektron wheels are fitted with high-pressure balloon tyres. Each wheel is carried on two bearings on the stub axle at the bottom of each shock-absorber strut. A steel brake drum liner for the Dunlop pneumatic brake unit is fitted into the outboard side of each wheel.

FAIRINGS:
When the undercarriage is retracted, the well that houses the complete unit in the undersurface of each wing is covered by three Lairings. The main leg fairing is attached directly to the leg and the small top leg fairing is hinged on to the undercarriage pivot casting and connected to the leg with an adjustable rod. The third fairing is hinged on the main plane root rib and is elcctro-hydraulically operated through a solenoid.
The main leg fairing is bolted to the leg at three points. Each fixing consists of two eye-bolts which pick up lugs incorporated in the leg. The position of the fairing can be adjusted laterally by means of shims under the eye-bolts and, at the lower attachment, fore-and-aft adjustment is possible as the bolts lixing the eye-bolts to the fairing pick up in slots on the fairing lower rib. The light-alloy skin of this main fairing is shaped to close the gap in the wing skin left for the shock-absorber leg and approximately half of the wheel. This skin is stiffened by three top-hat section ribs and a number of top-hat and Z-section stiffeners. The forward and rear edges are strengthened by square-section tube and angle section stiffeners. A small access door is incorporated in the fairing skin opposite the bottom link attachment bolt, to enable the shock-absorber to be removed and replaced without removing the fairing.
The small top leg fairing door completes the sealing of the wing under the shock-absorber strut in the retracted position. It comprises light-alloy inner and outer skins stiffened with Z-, top-hat and square-section stiffeners and is hinged onto the undercarriage pivot casting. An adjustable connecting rod picks up a swivel eye-bolt on the fairing door and a bracket on the shock-absorber strut, so that retraction of the leg closes the door.
The undercarriage wheel door is designed to cover the gap in the lower wing skin not covered by the two leg fairing doors. It comprises inner and outer light-alloy skins spaced apart by Z-section light-alloy plate ribs. The inside edge is strengthened by a channel-section stiffener and a reinforcing skin faking. Two hinges are provided at this inboard edge, which pick up with the root rib of the main plane, and a large bracket is attached to the same rib to support the upper end of the hydraulic jack that operates the door. The lower end of the jack piston is connected to a boss at the top rear corner of the door.