For most of 6 June 1944, the D-Day, the Tempests of 150Wing were hold in reserve. Even though at Readiness from 0345 hrs, it was not until mid-morning Wing Commander Roland "Bee" Beamont was able to led off 486 Squadron for a convoy escort down Channel for one and a half hours. The Tempests maintained these patrols at squadron strength with no action for the remainder of the day until at 2200 hrs when an ops order was received: "Immediate Wing scramble of 3 and 486 to the British sector Ouistreham-Caen, 10,000 ft. Enemy aircraft active." But only to be recalled at night set due to poor weather.

On 7 June the Tempest wing patrolled the left flank of the battle in the area Le Havre-Lisieux-Caen, but without any action.

Then on 8 June came what all had been waiting for. At midday W/C Beamont led 3 and 486's Tempests to the Rouen-Lisieux patrol line again in sunny weather. The R/T broke silence, when Blackgang radar (Isle of Wight) said: "Harlequin Leader, have probable trade for you. Six-Plus unidentified at 20 miles north of Rouen, no height at present".

"I called, ´Keep your eyes skinned and stay together´. The Wing was now thundering towards the northern outskirts of Rouen when I saw them - an untidy line astern of single-engine fighters crossing our heading from right to left about two miles ahead and 2000 ft below. It was perfect radar intercept by the Blackgang controllers.

Calling Johnny Iremonger's 486 New Zealanders to stay up and cover, I took 3 Squadron round in an easy curve over the oncoming formation until we were directly above and up-sun of them, and thyen winged over down at the saying, ´Hold your fire, they look like Mustangs.´

Then as the range closed quickly with our good speed advantage, the gaggle ahead rolled left and I could see the slim tapered wings and rounded tips - 109s!

I called, ´Tally-ho! They're 109s - come on in,´ and without need for any more power I slid RB down to close rapidly in behind the last of the formation. At about 500 yds they saw us coming and broke very sharply to port with maximum boost exhaust smoke and curling white vortices streaming from their wing tips. Eliminating consideration of the leader and the rest, I fastened on my target and pulled tightly inside his turn to open fire with a short burst at about 400 yds. We were closing very fast and as he rocked his wings in violent changes of bank I had to throttle back sharply to stabilize below his tail-wheel at about 100 yds, and in an over-the-vertical bank and at about óne ring´deflection which gave an aim-off line well forward of his spinner, a second short burst showed strikes on fuselage and wing roots and he suddenly streamed smoke and oil on my windscreen.

Breaking right as he slowed sharply, I rolled back alongside his tailplane and saw fire streaming from the wing roots but no sign of the pilot in the cockpit.

Confident of cover by my No. 2, Lefty Whitman I had not looked back for a significant few seconds, and then bang! The Tempest shook, there was a strong smell of cordite and a cauliflower-sized hole had appeared in my starboard wing!" 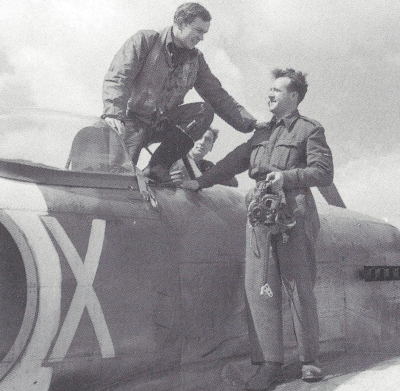 George "Lefty" Whitman has also written about the first Tempest combat in "Listen to Us":

"...I realised that they were sucking us in and as we attacked I looked behind and here was the other pair diving down on us out of the sun. I throttled back as "Bee" fired at one of four and yanked my Tempest into a hard turn, firing at the leader who exploded like a clay pigeon. Snap-rolling back, I saw "Bee's" target breaking up and as I tried to get the second in my sights he dived vertically into the cloud and I followed. Assuming that he would be heading east, I went down almost to the deck but couldn't find any trace of him. I heard "Bee" telling 3 Squadron to keep quiet, as there was a lot of chat, while they pursued remaining 109s. He had disappeared, having caught a cannon shell in the right wing."

With 20 miles of enemy skies to the coast and 120 miles of Channels to reach base, Beamont set up economical cruise and checked for any signs of fuel, oil or coolant loss. Everything looked normal, but the cruise speed was well down due to the damage. A protuding starboard undercarriage? But Beamont touched down safely at Newchurch.

RB had received a cannon shell from above between the main and rear spars of the starboard wing, and just missed the fuel tank and caused the starboard undercarriage fairing to bulge, but no further damage. The whole wing could be replaced by the Servicing Wing. Flt Lt A R Moore also claimed a Bf109, giving the Wing a total of three destroyed during the day.

The only casualty from the first Tempest combat on 8 June 1944. JF-A (JN796) suffered an over-speeding propeller and Flt Sgt M J A Rose had to force land within the Allied beachhead. The Tempest was retrieved and reparied. Rose was returned to Newchurch by the Navy the next day!

"The performance, manoeuvrability and gun-aiming accuracy of our aircraft had all proved, just as we expected, to be superior against the 109s. The Tempest had arrived and now we were in business!"

I was leading the Newchurch Tempest Wing on a fighter sweep on the Caen area of the beachhead via Rouen, Bernay and Argentan. We took off from Newchurch at 12.25 hours, and crossed the French coast at Pte d'Ally at 10000 ft. When we were a few miles to the West of Rouen at 12.50 hours over scattered cloud, I saw five aircraft in line astern at about 6000 ft, turning from East to North. Leaving 486 (NZ) Squadron up above as top cover, I took No. 3 Squadron do investigate.

I closed in behind the aircraft at 470 IAS and recognised them as Me-109Gs. They were travelling at approximately 300 mph and did not realise they were being bounced until just before I had opened fire, when the e/a broke to port and dived for cloud with violent evasive action. I selected the fourth or last e/a, I am not sure which, and opened fire with a 2/3 second burst, starting with 30 degrees deflection, and changing according to the e/a's evasive action.

I opened fire at about 500 yards range closing to point blank, and saw strikes at the end of the burst on the starboard side of the fuselage. The e/a immediately poured smoke and flames. I had to break to starboard in order to avoid collision and then to port when I saw clearly the e/a enveloped in flames in an inverted dive. I broke to starboard as I finished my attack and heard a loud bang and saw a strike om my starboard wing. My No 2 who subsequently saw my e/a disintegrate and the starboard wing broke off, saw two Me-109s diving down out of sun at him and myself. My u/c warning lights went on so I handed over to S/Ldr Dredge of No. 3 Squadron, and set course for base where I landed at 13.30 hours. The aircraft I destroyed was camouflaged mottled chocolate and brown and no national markings were visible.

I was No. 2 to W/Cdr. Beamont as he was attacking one of the Me.109G’s. As they were attacked they split into two sections and I observed strikes on the fuselage and starboard wing of the Wing Commander’s target. Then I saw it burst into flames and the starboard wing came off, the aircraft flicked over and went down in flames.
Before making an attack myself I looked behind and saw two Me.109G’s slightly above on the port quarter diving in to attack out of the sun. I throttled back and the leader over shot. I opened fire at 300 yards with A.S.I. 370 m.p.h. with 15° deflection. The enemy aircraft did a climbing turn to port and I saw two strikes, one in the wing root and one in the cockpit, and then the target blew up. I claim a Me.109G destroyed and confirm W/Cdr. Beamont’s claim of one Me.109G destroyed. After this engagement I pulled up then heard the Wing Commander call up and say his aircraft was damaged and he was returning to base. I had lost him in cloud so I rejoined the formation which was orbitting up sun.

I was Green 1, flying on the port of the Wing Leader when he sighted suspect aircraft. He turned and dived and went down with him. When at about 600 yards we recognized them as Me.109G’s camouflaged a mottled brown. As we closed to 300 yards the Me’s broke to starboard towards cloud. I saw the Wing Commander go for one of the enemy aircraft and I picked out another which was diving under cloud at about 7,000 feet quite straight. I was then indicating 300 m.p.h. and closed in easily to about 200 yards with I.A.S. 360 and gave it a 1 second burst from dead astern.
Flames immediately appeared from the starboard side of the cockpit followed by almost complete disintegration of the cockpit area. It then turned on its back and went straight down in flames. (Upon landing a piece of this aircraft was found in my radiator which was damaged.) I continued straight ahead and saw another Me.109 at 4-500 yards. I had it dead ahead and gave a 1 second burst before it disappeared into cloud. No strikes or results were seen.

Sources:
Typhoon and Tempest of World War 2 by Chris Thomas
Tempest over Europe by Roland Beamont