Although unlike many other types of aircraft in the RAF's arsenal throughout the Second World War, the Hawker Tempest had nothing much to do with "Electronic Warfare". With this technology in its infancy the pilot's eyes, in a fast and manoeuvrable single-seater fighter aircraft were deemed to be at the time sufficient, for the work these types of aircraft undertook.
This kind of "Electronic Wizardry" was the realm of Bombers and Fighter Bombers, with numerous "Measure and Counter Measure" devices being developed and up-dated for navigation, search and protection. One such radar device was the AN/APS 13, code named "Monica", developed in this form by the "boffins" of the Bomber Support Development Unit (BSDU) at Defford in Worcestershire; this unit was also home to the Telecommunications Research Establishment (TRE) and the Telecommunications Flying Unit (TFU).

The AN/APS 13 tail-warning device was designed to alert the aircrafts crew in the event of an enemy fighter attack from the rear, it was deployment by the R.A.F. in June 1943 but unfortunately it was quickly countered by the enemies electronics experts when this system was recovered from a downed bomber and reverse engineered, it then materializing in Luftwaffe aircraft as the "Flensburg", which was used with great effect to home-in on any "Monica III E" emissions. Even though "Monica" was easy to operate and worked satisfactorily, when it was discovered that this system hade been compromised, the device was taken out of use.

It was not until the 7th of July, with the battle against Hitler's new "Terror Weapons" in full swing that the Air Ministry decided to give "Monica" another try. It had become immediately obvious after the first few encounters with these small but deadly pilot-less aircraft, that detecting this menace quickly enough to do anything about it in the clouded skies and poor visibility over the English Channel and Mainland of Southern England, that any method to save time pinpointing these "Robots" would be very useful. The first trials of the Monica III E as a range indicator against the flying bombs were carried out by the F.I.U. at Wittering in a Mosquito Mk VI borrowed from the B.S.D.U. but instead of this device being a backward looking system, it was reversed and became a forward looking system. 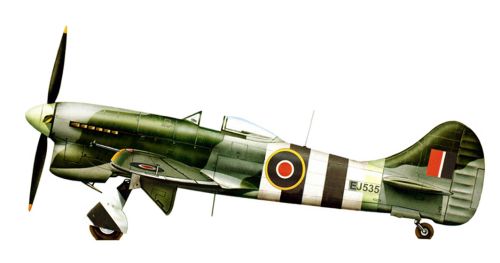 Delivered from the T.R.E. at Defford for tests by the F.I.U. at Newchurch, to range find Flying Bombs at night,
EJ535 with Monica IIIE equipment installed July 30th 1944.

These trials again were successful, so after much re-engineering and size reducing the system was then fitted into the cockpit of a Hawker Tempest V (EJ535) belonging to the T.F.U. This Tempest fitted with "Monica" known as "aircraft 535", was flown from Defford in late July, to Newchurch in Southern England to be evaluated by the pilots of the F.I.U. detachment that were already fully engaged in night operations against the flying bombs. The commanding officer of the F.I.U. unit at Newchurch at that time was Flt/Lt; later Sqn Ldr Joseph Berry who had previously served with the T.F.U. at Defford, from the end of December 1943 to mid February 1944, after his tour of duty had expired flying Beaufighters in the Mediterranean.
These pilots flew evaluation tests by night and day on a dozen or so occasions against the flying bombs, and using their own aircraft as targets when no flying bombs were available. 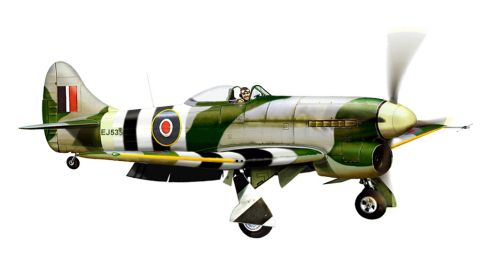 One of the main physical difference between the "Monica III E" devise fitted in the Tempest V from that of all the other system fitted in the other aircraft, was the replacement of the Mark V (P.I.) display tube, with a simple; small orange warning light fitted to the right of the Tempest's gun-sight.
Once a flying bomb had broken the beam and activated the warning light, the pilot knew he was within range of his target, the simplicity of this devise though had unfortunate side effects, any flying below 1,500 feet would cause the warning light to light up, this was found to be the ground echo's from the system giving a false reading, this effect was never a problem in high flying bombers, but as a large number of flying bombs came over the coast at that altitude or less; this constant "lighting up" of the warning light made this system non practical and it was again taken out of use.

A footnote to this story is probably how the AN/APS 13 radar system was used to alter the outcome of the Second World War in its most decisive form; it was with the deployment of the Atomic bombs that were dropped on Japan to end hostilities, these atomic bombs were designed to detonate or air-burst some 2,000 feet above ground level by the use of a proximity fuse devise, it was from this AN/APS 13 system that these proximity fuses were developed.

1. Verbal instructions were received by Fighter Interception Unit from Air Defence Great Britain to carry out trials of A. N. A. P. S. 13 as a method of range finding in Tempest aircraft, operating against Flying Bombs at night. A Tempest V aircraft, fitted with the equipment, was delivered from Defford to the F. I. U. Tempest Detachment at R. A. F. Newchurch, for trials, at the end of July.

2. The A. N. A. P. S. 13 consists of a Unit of approximately 15" by 8" by 10" overall dimensions, mounted on the port side of the aircraft behind the pilot. The pilot's control box is mounted on the starboard knock out panel and carries an on/off switch and a test switch for the indicator lamp, which is mounted near the gun sight. The indicator lamp will light up at a range, which is pre-set on the ground. A single dipole aerial is carried on the port wing near the wing tip. The overall weight of the equipment is approximately 25 lbs.

3. Since returning from Newchurch to Wittering for adjustment, the equipment has been flown six times by day and six times by night by the F. I. U. Tempest detachment. The day trials have been carried out on target aircraft, owing to the shortage of Divers when required; but all the night trials have been done with Divers as targets.

5. During each of the twelve test flights the warning lamp came on at ranges of 300 to 350 yards, or when flying at less than 1500 feet above the ground. The light remains on to zero range. The dimming of the bulb is considered adequate.

6. As the equipment is small, and extremely easy to operate, it is ideal for Tempest aircraft. The present range setting is just within the firing range and should remain as it is. It gives no indication of closing speed, but this is not important, as the pilot can tell whether he is closing by the increase of the intensity of the flame from the propulsion unit of the bomb.

7. The pilot's control panel and cabling is at present installed on the emergency jettison panel and in this position might cause difficulty in abandoning the aircraft. It is suggested that this unit be moved to a position on the same side of the fuselage above the petrol cocks.

Text and images:
Graham Berry
Note that all images are artists impression.