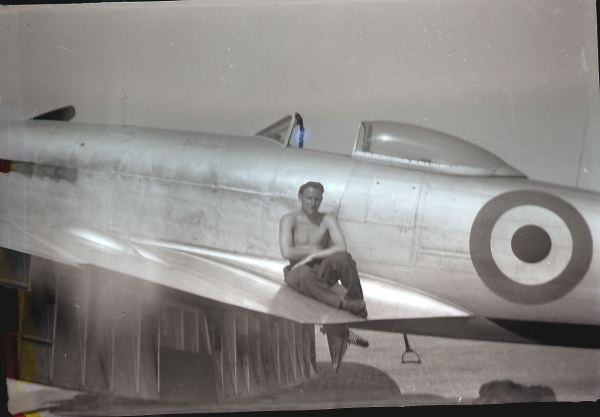 The Webmaster received this photo from Roy Saunders:

"This photograph was in a collection of negatives belonging to my father who was the 1st Steward of the P&O troopship SS Mooltan, she sailed between Tilbury Docks and Austalia, carrying Troops and other forces to and from North Africa and The Middle East. I believe the Aircraft to be a Mk 5 Tempest, post 31st March 1945.
It is possible that the negative was accidentaly left at out house in Margate, Kent, by my Uncle who was an Aircraft technician stationed at RAF Manston at that time. The negative is of a smaller film stock than the others, my uncle used a "Solo Pilot" folding camera, obtained during the Berlin Airlift. That could be the one. Photo is taken in Khormaksar, Aden by SAT Cpl G.H. Mc Coan."