RAF Ayr/Heathfield opened operationally as a fighter sector on 7th April 1941 with construction starting October of the previous year, Many of the local buildings were requisitioned the most prominent being the old powbank mill on the SW side of the airfield which in January of 1941 became the fighter sector headquarters for the west of Scotland, before any overland radars were in service.
RAF Ayr/Heathfield was directly controlled by No13 Group and had three hard runways 01/19 which was 4100ft x 50ft, 07/25 was 4700ft x 50ft and 13/31which was 4500ft x 50ft, with surrounding grass field still soft, all perimeter tracks were 50ft and dispersal and taxi tracks to hard standing, hangars etc were 35ft.

Being adjacent to the Trans-Atlantic terminal airfield at Prestwick, which was still a grass aerodrome, and with the increasing numbers of Hudson, fortress and liberator aircraft expected to arrive use had to be made on occasions of the newly completed runways at nearby Ayr/Heathfield so a combined circuit was arranged for landing traffic.

The airfield was also home to day and night fighter squadrons until 1943 when it became an Armament practice camp. Occasional lodger facilities were provided for the FAA, No 722 Sqn which arrived form Machrihanish in July 1944 and acted as FRU with a wide variety of aircraft. It had detachments and flights at a number of airfields until it made a move to Burnscough in Jan 1946. Ayr was transferred on loan from RAF 13 Group on 6th Sept 1944 and commissioned as HMS Wagtail on October 1944 function was as a FRU, FOCT Sqn two disembarked Sqns with accommodation reserved for two RAF Sqns and MAP marine Establishment.

The FRU was in addition to disembarked Sqns, it also housed, a communications squadron, a calibration flight and the bombardment spotting school, it could accommodate up to 110 aircraft. HMS Wagtail was reduced to care of maintenance on 10th March 1946. Under administration of RARA with accounts borne by RNAS Abbotsinch (HMS Sanderling)

Between 1951 and 1957, Ayr was used for storage by the USAF and in 1955 a new 03/21 runway was opened at Prestwick, touching the northern limits of the airfield, in the 1960's a housing scheme began and in the mid 90's a large retail park covered most of the southern airfield with " liberator drive " leading in from the road, at the entrance a replica spitfire was mounted to remember No.602 Squadrons service at the airfield but this was sadly destroyed in the gales of 1996, very little is to be seen of the airfield today although a golf clubhouse sits on the remaining threshold to runway 13 and Ayrshire transport training association premises occupy a part of the remaining 13/31 runway. 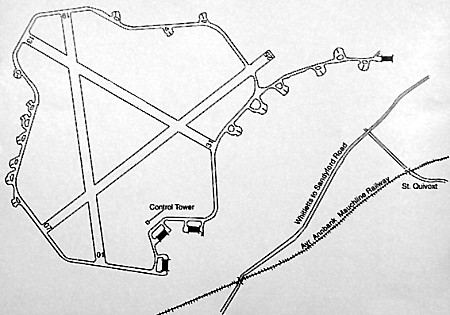