Situated on the extreme, and somewhat desolate east coast of Essex, this Second World War fighter station started out as a primitive landing ground in late 1936. It was used as a re-fuelling and re-arming point by fighter aircraft using the air to ground firing ranges at close by Denghie Flats.
During the early 1940s there was a growing need for more fighter stations to the east of London to improve the capitals air defences, especially airfields which had solid runways that were desirable for larger twin-engined fighters envisaged. To fulfil the above requirement work commenced to further develop this site in March 1941. It was furnished with three hardcore and asphalt runways plus a perimeter track, around which were nearly 30 fighter pens cum dispersal points. One Bellman type steel hangar was erected, supplemented by a further twelve Blister types dispersed around the perimeter. Several building and Nissen hut sites were provided which could house nearly 2000 personnel.
On its completion in April 1942 the station was taken over by No.11 Group of Fighter Command, to act as an independent fighter base within the Hornchurch Sector. On the 15th of the month the first of many fighter squadrons to be based here over the next three and a half years arrived. This was a Canadian manned squadron (No.418) equipped with the twin-engine Boston aircraft that were painted all over in matt black. This type of aircraft was of American origin and had a tricycle undercarriage so definitely needed Bradwell's hard runways. The main task for this squadron was not defensive but more offensive as they were employed chiefly on night intruder missions to airfields on the Continent. In August they were joined by a British squadron who had just converted from Bostons onto Mosquitoes, and they were similarly employed on attacking targets in France. Due to its position near the English Channel, the airfield was constantly being used by aircraft in distress or short of fuel, especially bombers such as Lancasters and Halifaxes, particularly before the special emergency landing runway was brought into use at Woodbridge.

In June 1943 squadrons equipped with Typhoons also operated alongside the Bostons and Mosquitos as this was a very busy period for Bradwell when the softening up process was beginning to take place to France and Belgium, in readiness for the forthcoming Invasion of Europe.
Numerous fighter squadrons came and went over the following year. By 1944 accent was on providing escorts for our daylight bombing raids to the Continent, or taking part in daylight straffing missions against French railways etc. The Boston's had departed in late 1943 and the most prominent aircraft operating from the station by then were Spitfires. There was however still the odd Mosquito or Beaufighter squadron in attendance for night fighter defence duties because London was still being blitzed at night. Also present in the latter half of 1944 were squadrons operating with Tempests that were attempting to bring down pilot-less flying bombs on their way to the capital. In August 1944 a Bradwell Fighter Wing was formed, consisting of three squadrons of Spitfires, and these were soon busily engaged in escorting the Airborne Forces paratroop operations to Arnhem in September. They also provided escorts for our Lancaster bombers engaged in daylight missions in support of our invasion forces on the Continent. 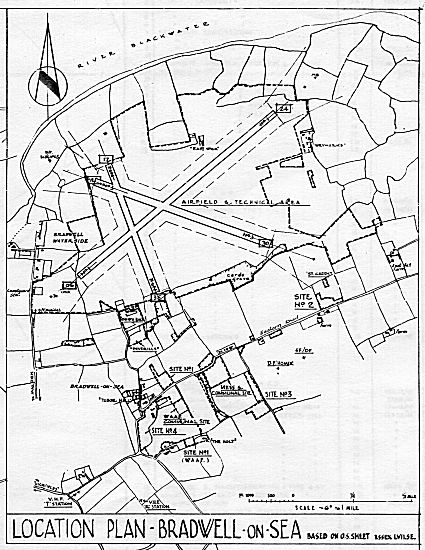 Bradwell Bay in October 1944. Tempest SD-P (EJ608) is prepared for another sortie.

In late February the Spitfire Wing departed when two Mosquito day fighter squadrons took their place, and continued to attempt to shoot down the Doodlebug flying bomb, by then being launched from He.111s bombers. At night they would also fly over to Germany to harass the enemy night fighters. Bradwell's final operation was mounted on the 25th of April 1945 but on the 7th of September the last of the total of twenty five fighter squadrons that had been based here departed. Usually there had been two squadrons at a time stationed here, but there were periods when this had increased to three and even four. Incidentally, this was the only fighter airfield that was fitted with FIDO, the fog dispersal system that used thousands of gallons of petrol when lit, to clear fog away from the runway. A smaller unit to operate from Bradwell Bay from April 1944 to February 1945 was No.278 Squadron, who acted in the Air Sea Rescue role and flew a handful of Walrus, Anson, Warwick and Spitfires. Its duties covered this stretch of the English Channel, especially over the invasion period when air and maritime activities were at their highest. The last flying to take place here was from mid July 1945 onwards when No.2 Armament Training Camp was present with its Martinet target tug aircraft. These aircraft were used for towing targets for the fighter squadrons still using the Denghie Flat Ranges. This requirement ceased on the 1st of December 1945 when the unit left for Spilsby in Lincolnshire, and Bradwell Bay airfield was then finally closed. In 1946 the Air Ministry transferred the land to another Government department, and after several years of development it became the site for one of Britain's first nuclear power stations and remains so at the time of writing in 1995. Although the power station dominates the landscape most of the runways are still in existence but in a very overgrown and crumbling state. Also to be seen is the control tower (which served as a private dwelling for several decades) plus two Blister type hangars and the odd brick building.

Most airfields built in wartime were a distinctive triangle of runways which enabled operations to continue whatever the wind direction. The triangle was a right-angled triangle with the longest runway being aligned with the main direction of wind for the area. There were typically two hangars, one either side of the base, dispersal areas (which were either frying pan shaped or triangular) and an assortment of other buildings. RAF Bradwell Bay is near the mouth of the River Blackwater. Bradwell Bay started off as a refuelling point for aircraft using the air firing range over Dengie Flats to the South. It was rebuilt into a proper airfield in 1940 and opened in 1941. Initially the base was occupied by Canadian forces flying Douglas Boston IIIs for night intrusion. They then converted to the Mosquito and shared the airfield with No. 23 squadron. Other aircraft types to see action here were the Hawker Tempest, and also Spitfire Mk VIIs. Its located just south of Bradwell nuclear power station and quite easy to find.

On one corner of the airfield is a memorial to the crews lost or missing and consists of a model Mosquito with its nose in the ground, On passing what used to be the control tower you will find it is now a private home with the neighbouring fire station turned into a garage. Hangars are now converted into barns, they are vast Nissen hut type construction and have certainly stood the test of time especially considering their closeness to the corrosive salt water. What was the main runway is now replaced by a line of connifers. 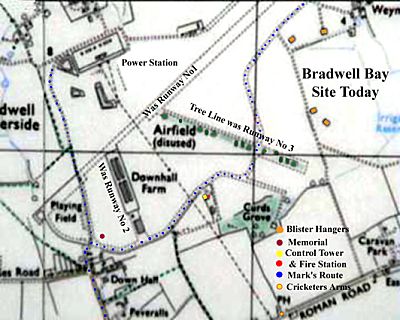 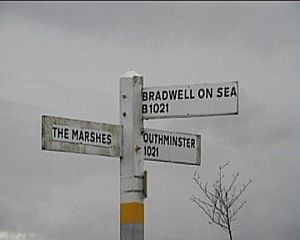