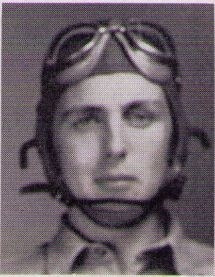 Morris Rose born Glasgow, 1923, Educated Kelvinside Academy, Glasgow, and Uppingham, Rutland until 1941, when he volunteered for the RAF.

He undertook what was then known as a University Short Course at Edinburgh University. This was designed to further their education and introduce them to the rigours of square-bashing. Having completed this preliminary training, he was sent to the United States with a view to becoming a pilot. He was posted to airfields in Georgia and Alabama.

He gained his wings and returned to Britain in February 1943. He was then posted to various stations until March 1944, to No.3 Squadron, Bradwell Bay. He flew Hurricanes, Typhoons and Tempests.

From April to September 1944 he was stationed at Newchurch. This was during the period of the “flying bombs”. On D-Day plus two he had an over speeding engine and made a forced landing on the beachhead. According to an account by Bob Cole, he ran towards the sea and our lines, and was told by some troops that he had just run through a minefield! He was brought back by motor-launch and his Tempest was also recovered and returned to service.

In October 1944 the squadron moved to Volkel in Holland. In February 1945 he had to land his plane behind enemy lines, and was taken prisoner. The squadron magazine said he was shot down. I thought he told me he ran out of fuel, but I cannot be sure. Obliviously he landed safely. Fortunately he was a POW for only three months, and after his release he was posted to India, where he served until he was demobilised.

Left: Morris Rose points out the essential characteristics of the V-1 flying bomb to other Tempest pilots at Newchurch, 23 June 1944.

On his return to Scotland he enrolled at Glasgow University to study Law and was apprenticed to a firm of solicitors. Law students at that time started the day with an 8.30am lecture before reporting to the office to continue the days work. Back to university for a further lecture at 4.30pm. After graduating, he spent a further six months with a firm of Edinburgh solicitors in order to become familiar with the routine of Parliament House, before seeking admission to the Faculty of Advocates. After devilling to the Hon David Watson Q C he was called to the Bar in July 1952. He married Jennifer in 1953, and they have a son and a daughter He practised as and advocate for 16 years until 1968 when he was appointed Sheriff of Grampian Highland and Islands at Aberdeen and Stonehaven. In 1979 within the same Sherriffdom, he became Sheriff at Dingwall until he retired.

Several years later he moved to Elie in Fife and although in precarious health for several years, he and Jennifer enjoyed life there until his death in 2002.