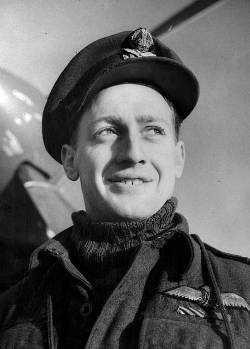 Harvey Sweetman was born in Auckland on 10 October 1921, Harvey Sweetman was a clerk before joining the RNZAF in April 1940. After completing his flying training, he sailed for the United Kingdom in November 1940 as a Sergeant-Pilot.

Having converted to Spitfires in Scotland, Sweetman joined 234 Squadron in mid-February 1941, and was posted a month later to 485 Squadron, the first New Zealand fighter unit, then forming at Driffield. Declared operational on 12 April 1941, the unit moved south to Redhill in July to begin Circus operations over France.

In early March 1942, having been commissioned as a Pilot Officer, Sweetman was posted to 486 Squadron which was then forming at Kirton-in-Lindsey as the second New Zealand fighter squadron with Hurricanes. The squadron began to convert to Typhoons and when the Wittering attachment ceased it moved south to begin anti-Rhubarb operations.

In early July Sweetman went on a Fighter Leader course and on his return to the squadron was made a flight commander. When his tour finished in August 1943 he was awarded the DFC and was posted to Hawker Aircraft as a production test pilot. On 16 February 1944 Sweetman rejoined 486 Squadron. In April its Typhoons were replaced by Tempests to become operational on 1 May as part of the Newchurch Wing. On 16 June the unit began patrols in search of V-1 flying bombs. During the next two months Sweetman destroyed ten V-1's and shared another.

He was promoted to Acting Squadron Leader on 15 September 1944 and was posted to command 3 Squadron. He led the Squadron to Grimbergen in Holland at the end of the month, to join 122 Wing, 2nd Tactical Air Force. Sweetman destroyed an Me 262 on 26 November, as it was taxying on Rheine aerodrome. In January 1945 Sweetman completed his second tour and returned to Hawker's for further test pilot duties. He later joined 3 Course at the Empire Test Pilots' School. His total score was one aircraft destroyed (3 individual and 2 shared previous) and 10 1/2 V-1s.

Harvey Sweetman passed away on 15 January 2015.