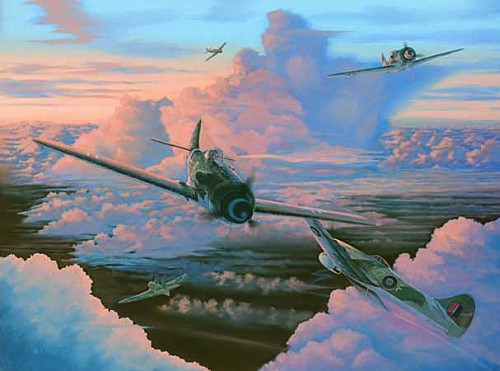 The Real Story:
Spring, April 15, 1945. With the pincers from both the Eastern and Western Fronts encircling the Third Reich any hopes of a German victory had long since been crushed. The German pilot's goal now was to survive from day to day and wish for a quick end to an already hopeless situation.

The pilots of the vaunted JG26 had been respected and feared in the war since their inception on 28 September 1939 to their bitter end in 1945, achieving more than 2,700 aerial victories, a kill ratio of 3 to 1.

Even though these pilots realized the final outcome of this war tthey continued to fight on as ordered - some for honor, most flying reconnaissance and low level bombing attacks against oncoming allied forces trying to stop the insurgence of armies into the Fatherland.

This is Brian Batemans latest painting, and its of JG26 FW190D-9s clashing with Tempest Mk. Vs of 80 Sqn in April 1945. The original is signed by D-9 pilot Uffz. Karl-Georg Genth and Tempest pilot Flt Lt John "Jack" Stafford.