CONCEPT  OF  THE  MODEL

I was eager to build a World War II fighter for my next project and was looking for something different than everyone else was flying. I was considering doing a Vailly Aviation Hawker Sea Fury when Roy Vaillancourt of Vailly Aviation asked me if I would be interested in building a prototype of the Tempest. He said he had a lot of interest from customers wanting a Tempest and was eager to design one to help round out his family of Hawker fighters. I knew that Roy was an excellent designer of large-scale warbirds and this big British fighter appealed to me. When I found good color plates of "JF-Z" in the typical RAF camouflage scheme with invasion stripes, I was sold and couldn´t wait to get started.

My Tempest is a model of a Mk. V that saw action during the liberation of Europe in 1944. The model is scratchbuilt from Vailly Aviation plans and is approximately 1/5 - scale. The wingspan is 96 inches with 1932 square inches of wing area. The fuselage is 81.5 inches long with a very impressive spinner. Scale operating features include fully proportional flaps, retracts (both main and tail wheel), sliding canopy and functional landing lights.
The wing is built-up structure with mostly balsa ribs, spruce spars and balsa sheeting. The wing is constructed in one piece, which gives a strong yet lightweight structure. All contol surfaces have scale hinges and internal linkages.

The large split flaps are operated from one high-torque servo located in the center of the wing driving carbon fiber torque rods out through each wing half. Four scale ammunition bay hatches on the top of the wing provide access to the aileron servos and flap linkages. The landing gear is pneumatically operated and utilizes Vailly Aviation´s scale shock struts on both the mains and the tail wheel.. 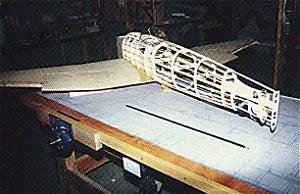 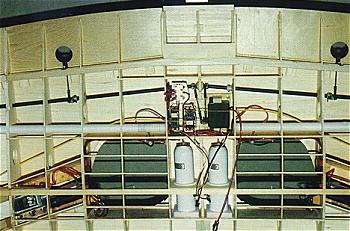 Just like the full-size Tempest, the bottom of the outboard section of each wing contains retractable landing lights. These lights ate hinged to extend, then illuminate when fully extended. They work very nicely and look really neat when coming in on final with the flaps and gear down..

The fuselage is also conventional construction with light ply formers and spruce stringers and balsa sheeting. The fiberglass cowl is of excellent quality and is huge enough to accommodate any engine (maybe even a Napier Sabre!). During construction it is not until the cowl is attached to the fuselage that the massive size of this aircraft is fully realized. I added a fully-detailed cockpit and full pilot figure to my Tempest. The large sliding bubble canopy is operated by a long-stroke pneumatic cylinder. All fuselage servos are mounted forward of the cockpit area with pull cables running to the rudder and carbon fiber push rods running to the elevator. The elevator and rudder linkages are hidden by fairings in the tail as they were on the full-size aircraft. These fairings are of vacuum-formed plastic and make hiding the cables very easy. 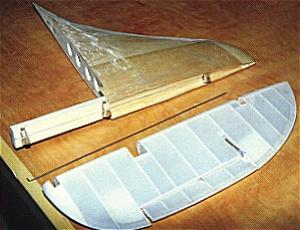 The tail wheel retracts forward pneumatically with sequencing doors. Once the structure was complete, the "real" work began. The only fabric covered area on this aircraft is the rudder. This is prototypical of the full-size ship. The rudder is covered with Super Coverite and is complete with scale trim tab and pinking tape. The rest of the airframe was ´glassed with Sig polyester resin over .6-ounce fiberglass cloth. This was sanded then primed and filled with standard auotmotive primer. After priming, the ship was sanded with wet/dry sandpaper used dry. I the laid all the panel lines using 1/64-inch drafting tape.

The model was again primed over all this tape and resanded until the panel lines tape started to re-appear. Then the tape was removed. This leaves a realistic-looking panel line groove. Next came all the rivets, lots of them! The Tempest was designed for speed so most of the rivets are flush-type. These were done using the "brass-tube-in-a-soldering-iron" method. All the raised rivets were done with drops of glue from a syringe. Only the stab and some ares of the fuselage are not flush-riveted. How many? Well, for an example, each main landing gear door has 150 rivets on them. Needless to say I lost track of the rest!

Now the model was finally ready for color. I have used automotive lacquer for quite a while on my past projects and hace always been pleased with the results. There are ten different colors on this Tempest. The local auto paint store has always done an excellent job of custom mixing my colors from paint chips and once again was up to the task. I sprayed the underside areas first then masked and sprayed the top side gray. I then applied paper masks that were lightly tacked to the top surface of the model using spray adhesive. These masks were used to spray the green camouflage patterns. When the masks were removed, the demarcation line was quite sharp so I used an airbrush to feather the line to a scale look. Next the invasion stripes were masked and painted and finally the markings. All the lettering and markings were hand masked and sprayed. This is a lot of work that usually entails days of layout and masking followed by a few minutes of spraying. This can be a frustrating time but the results are always well worth the effort. Weathering was next. I have found that the key to a good weathering job is: "Less is more." Resist the temptation to spray "just a little more." It usually turns out to be too much.

With the ship all done and assembled, the ready-for-flight weight of my Tempest came to 45 pounds. I was concerned that this was a little on the heavy side, but Roy kept 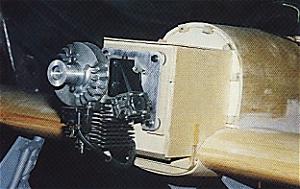 telling me that this was no problem. This is my first large warbird so I was still skeptical, but after the first flight all my fears evaporated. The model uses a Quadra Q-75 with a 24-12 Zinger propeller. This combination works perfectly. After a few taxi runs to make sure the model tracked straight, it was time to turn this model into an airplane! Taxing for take-off, this model glides over the bumps very well on its shock-absorbing gear. Line up on the runway centerline, set ten degrees of flaps, one final control check and we are all ready to go.

Add power smoothly and slowly. The rudder becomes effective right away as the tail lifts and the model gradually accelerates looking just like the full-size Tempest. Just a bit of up-elevator and it is airborne! Gear up, gaining a little comfortable altitude. It flies! The Tempest is very responsive to all contol inputs and looks very realistic in the air. Fly-pasts are very impressive and still leave me speechless! With the gear and flaps up it is very clean and flies scale-like at two-thirds throttle. The Q-75 does a great job and the model handles more easily than its weight would have you expect.

Setting up for landing, reduce power to just below one half throttle. While coming overhead, select gear down and turn cross-wind. With the gear down quite a lot of drag is created, so a little power must be addes to maintain spped, the start feedind in flaps to about half deflection. There are minimal, yet very predictable, trim changes with flaps deployed. Start a sweeping turn onto final.
After rolling out on final approach add full flaps. The Tempest has very large and effective flaps and they really 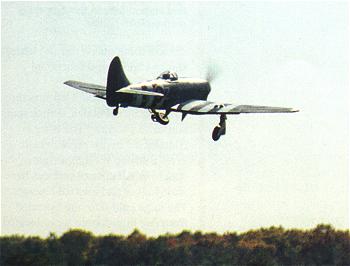 slow down this big fighter. Round out for landing, raise the nose slightly as power is reduced and flare onto the runway. The airplane will gentle settle to the ground and "stick" to the runway. As it slows further, retract the flaps and wait for the rest of the speed to bleed off. Turn off the runway, open the canopy and taxi back. "Impressive...." The Tempest is an incredible machine! Just like it was designed to be. It is large and powerful and fast and maneuverable. It has proven to be a great choice for a scale model. It handles well both on the ground and in the air. Its large wing and flaps slow it down nicely for an easy landing. What a thrill it is to fly a giant-scale warbird that flies as good as it looks...! Definitely a project worth the effort. 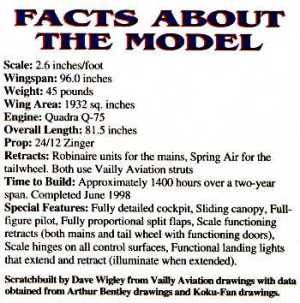