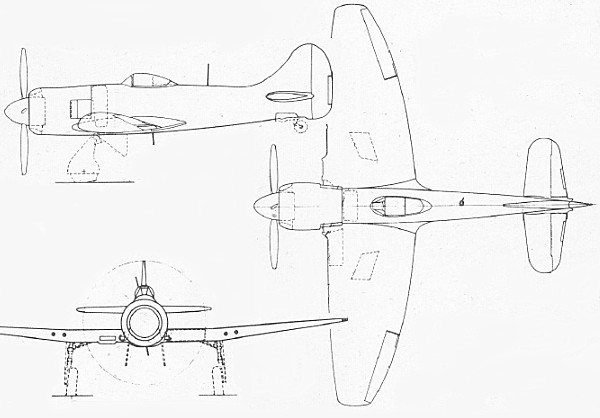 1. The Tempest II is a single-seat, low wing cantilever land monoplane with retractable main wheels and tailwheel, designed for day and night fighting duties in temperate climates and, in the case of later aircraft, in tropical climates also. It is powered by a Centaurus V radial air-cooled engine which has 18 cylinders and drives a Rotol variable-pitch left-hand tractor propeller. The armament consists of four 20 mm. Mk. V Hispano guns installed two in each wing. Provision is made for carrying either a 250 lb., 500 lb., or 1,000 lb: bomb, four rockets or, on later aircraft, a drop fuel tank of 45 or 90 gallons capacity under each wing.

2. The cockpit is totally enclosed; entry and exit are normally obtained by sliding the hood backwards but, in case of emergency, the hood and a panel on the starboard side of the cockpit may be jettisoned. The pilot and the more vulnerable parts of the aircraft are protected by armour plating. The flying controls are of conventional stick and rudder bar type; the seat is adjustable for height and the rudder bar for leg reach.

3. The fuselage is of composite construction, the engine mounting and centre fuselage being formed of steel and light-alloy tubes covered with fixed and detachable metal panels while the rear fuselage, including the tail end, which has an integral fin, is of metal monocoque construction. The engine cooling shutters, which are situated aft of the main engine cowling, are controlled on early aircraft by a selector switch in the cockpit, but on later aircraft are controlled automatically by a thermostatic inching control unit.

4. The stressed-skin cantilever main plane consists of port and starboard wings which are attached directly to the fuselage; the undersurface is horizontal for approximately one-third of the span and the outboard portions rise to form a dihedral angle. The ailerons are of modified Frise type with mass-balance, and the hydraulically-operated split-flaps extend from the root to the inner ends of the ailerons. Two direct-entry carburettor air intakes are provided, one in the leading edge of each wing. On later aircraft, there is also a filtered intake under the top engine cowling, for use in the tropics. An oil cooler is situated in the leading edge of the starboard wing outboard of the air intake. The yolume of air passing through the cooler is regulated by a shutter, which, on early aircraft is controlled by a lever in the cockpit. On later aircraft, the shutter is auto-matically controlled by a thermostatic inching unit which operates two electro-hydraulic solenoid valves.

5. The non-adjustable cantilever tail plane comprises two separate inter-changeable half-planes bolted to the fuselage sides. The rudder and elevator are mass-balanced and are provided with trimming tabs which are controlled from the cockpit.

6. The alighting gear consists of two main wheel units which retract inwards and slightly backwards into wells between the wing spars, and a tail wheel unit which retracts forward into the fuselage, the operations being effected hydraulically. A pneumatic assister comes into operation when the under-carriage is retracted. Mechanical locking and electrical indicating devices are provided as well as a warning lamp, The wheel of each undercarriage unit is carried on a stub axle, the shock-absorber being of the oleo-pneumatic type. Each wheel is fitted with a pneumatically-operated brake actuated by a lever on the control column; the brakes operate differentially in conjunction with the rudder bar. The tail wheel is fitted tith a twin-contact self-earthing tyre and is carried on a fully castoring &o-pneumatic shock-absorber strut; the wheel is self-centring during retraction.

7. The main fuel tank is carried in the fuselage just aft of the forward firewall: two further tanks are housed, one in the inner portion of each wing, between the main spars; there is also a nose tank in the port wing. All fixed tanks are of the self-sealing type. Later aircraft have a transfer fuel system, which means that the fuel is always supplied to the engine from the main tank, into which it is transferred from the wing tanks by air pressure. On these aircraft, two 45 or two 90 gallon drop tanks may be carried, one under each wing. The oil tank, which is also self-sealing, is mounted above the top longerons between the aft firewall and the pilot’s instrument panel, and is protected by armoured cowling.

8. The four 20 mm. guns are electro-pneumatically controlled from a push-switch on the control column spade grip. All guns fire outboard of the propeller disc and the ammunition for them is carried in the wings. A camera gun, mounted in the starboard wing, can be operated separately or in conjunction with the guns.

10. Aircraft equipped for operation in tropical climates carry desert equipment for use in the event of a forced landing in an isolated locality. This equipment consists of two large water bottles, one small water bottle and carrier, canvas signalling stripes, a signalling pistol and cartridges, a heliograph, a tool kit and emergency rations.