The Berrys' visit to Holland 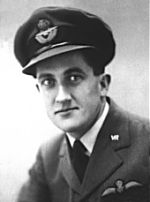 There was never, really any doubt; that from the day I was first told a story, that my fathers late cousin had won a medal for shooting down more 'doodle-bugs' in the war than any-one else, that I knew I had to learn more about this man. With this being the only information I had, my mind worked overtime trying to discover what this man;Joseph Berry had done to merit this award, so my research began, and nearly four years later the family anecdote I was told pales into insignificance now that the true story of one of the second world wars greatest un-sung heroes is slowly being revealed.

It is fair to say that this journey of discovery has both delighted, fascinated and consumed my every thought, so much so that after my research had revealed the final resting place of this heroic family member, nothing was going to prevent myself and the other members of the Berry family who had been swept along on this voyage, from paying our respects to the memory of this brave man. It was agreed very early on that all the people that shared this feeling were of one voice, and plans were discussed as the best way to arrange our visit, taking into consideration age, health, geography and work commitments of all the family members, this was not going to be easy.

But with our determination and a great deal of help from our new found friends in Holland, our plans were drawn up and finalized, the help given to use by Chris Timmer and Joop van der Does was un-believable, and thanks are not enough to re-pay these gentlemen for the time and effort they un-selfishly gave to make our journey one that we will never forget.

Even though Joseph rests so far away from his homeland, the Berry family know that the memory of this fine man is safe in their hands.

Our travel plans were agreed, and an early afternoon KLM flight was booked, so cousin Neil could drive down from his home in Crook, Co Durham at his leisure to meet up with the rest of the group here in Yorkshire, so after lunch on Friday the 27th of June the assembled party set of for Leeds/Bradford airport, the first leg of our long awaited journey.

Upon our arrival at the airport, and having gone through the usual procedures; we could now relax a little in the airport's watering hole, where we nervously imagined the forth-coming weekend, hoping the rest of our plans would be as straight forward, we were not to worry, things were to go like clock-work. 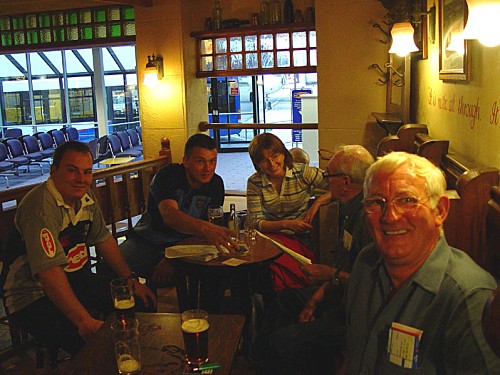 Relaxing in the airport's watering hole. 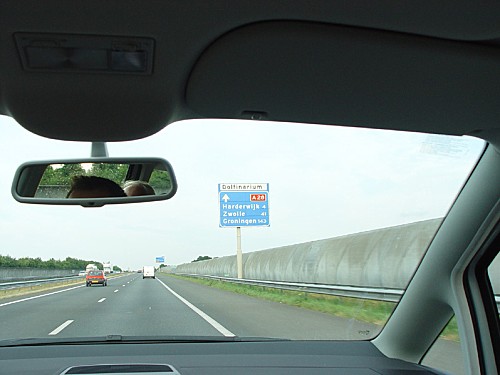 After a very civilised 55-minute flight, we landed at the enormous Schiphol/ Amsterdam airport, were we were directed to the Rent-a-Car pick-up point. Our chosen transport was a seven-seater people carrier, which was driven out for our inspection, we loaded up, and with Mark driving and Andrew navigating we hit the road, this job was best left up to the fearless younger members of our group.

To reinforce by comments about being well looked after, on our arrival in Holland it was agreed to ring Joop van der Does, he was at his home celebrating his daughter's birthday, and waiting for our plane to touch down, not only did we get a warm welcome from him, but he also arraigned to meet us along the way to show us the best route.

The journey by road was from a passenger's point of view, a piece-of-cake, and after a few hours of travelling we finally found our Hotel in Winschoten about 11 o'clock that evening. Tired and hungry; we booked in and asked if there was any possibility of any food, a long shot at that time of the evening, but the staff at the Royal York did us proud, and very welcome food was provided. 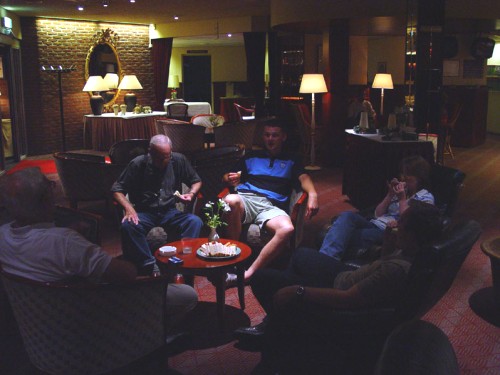 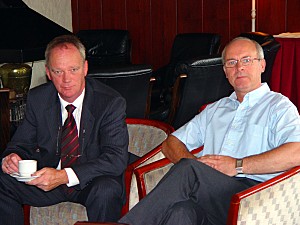 Even though we were all exhausted, from our journey sleep did not come easily, the thoughts of the following days program kept running through my mind what kind of emotions would we experience.

It probably had something to do with the hour difference between our two countries, because when our wake-up call came we were already up and ready for breakfast, everyone was in the dinning room in good time to enjoy our first meal of the day; then we retired to the lounge to wait for our guest to arrive.

After travelling a hundred or so kilometres, Joop van der Does was the first to meet us and over coffee we talked about the days events, then a party of people walked through the door, it was Chris Timmer; he said 'Graham Berry, pleased to meet you' Chris was accompanied by his lovely wife 'Wily'; and his friend Harry and his young lady friend, we happily introduced ourselves to each other with plenty of handshakes and kisses, now it was time to do what we had waited these four long years to do. We called at the local village florist to collect our floral tributes, and then drove just a short distance to Scheemda cemetery; this was the moment we had long waited for, the calm and peacefulness on that warn June morning was overwhelming, surrounded by about sixteen well-wishes, including a representative from the town council and a photographer from the local newspaper. 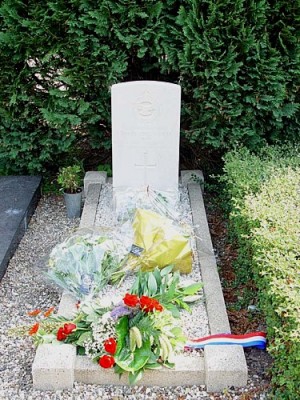 My father George, (Joe's cousin) placed the first of our two floral tributes, and then Debbie, Andrews wife laid the second, on this solemn moment I was experiencing the full range of emotions, as I am sure were we all.
The town council representative placed his tribute on behalf of the people of Scheemda, then a respectful minutes silence was held.

Joop then read a speech he had written, about what Joseph Berry had meant to him, this very moving tribute meant a lot to us too. As we stood there in our thoughts you could not help but notice how immaculate the grave had been kept, all credit to these kind villages that had looked after Joe's grave for all these years.

All too soon our time spent with Joe came to an end, and we had to move on to our next visit, which was the International Museum 1939 - 1945 in Uithuizen, this museum houses the remains of Joseph's Hawker Tempest V that were excavated in the early 80's by our host Chris Timmer. 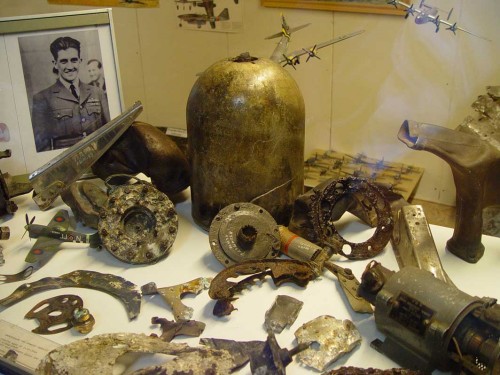 On arriving at the museum the first thing you see is a full size East German Mig 21 Jet, and a number of Trucks and assorted military vehicles, but inside was what we had came to see, and eventually after walking through this amazing display of all things second world war we came to the display cases housing aircraft parts.

Having already seen photographs of the display cabinets that housed the parts of Joseph's Tempest, I knew exactly where to go. On display for all to see were a small number of remaining parts from SD-F, not very much was now left of what was once an enormous war bird, but what was nice was that Chris Timmer opened up the display cabinets and let us see at close range; and handle these pieces of broken wreckage.
Joseph had never been out of our thoughts the whole weekend, so being able to touch the parts of his aircraft almost meant we were touching him, and when we handled the undercarriage lever we knew the last person to use this handle was Joe.

The museum is really an excellent place to see, and well worth a visit to anyone who is planning to go to Holland, we were amazed at the amount and quality of the exhibits to be seen.

So much so that after what seemed to be such a short time, we were told that refreshments had been served, so we made our way to the café area where sandwiches and cakes, tea and coffee were there for our lunch, again the hospitality of our guests was on display. 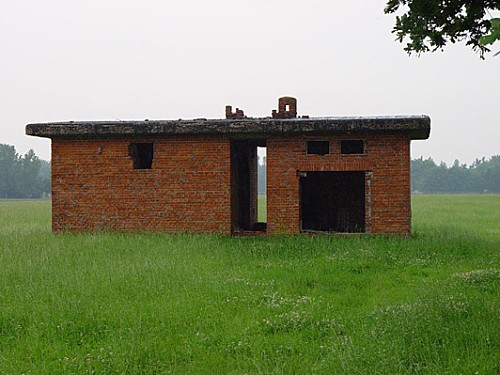 Moving on from our museum visit, we travelled south back towards Veendam to have a look at what is now left of the German radar site Gazelle, this was the site that Joe's Tempest was shot down from, and during the war was the most important radar site in Holland.
The whole area has now been turned back to agriculture, so to the un-trained eye nothing can be seen, after the war a new main road the N33 and the A G Wildervanck canal were built running right through where Gazelle once stood. So only the odd concrete base and one brick building remain of this once expansive structure.

Our final visit was to the farm land owned by Mr de Lange the son of the farmer that was the first person to reach Joe's Tempest after it had crashed, he showed us the exact spot where his airplane hit the ground, and even after nearly sixty years of ploughing a small impact crater is still visible.

Once again our thoughts were solemn, just as they had been earlier in the morning on our visit to the cemetery, the majority of our group had never even known Joseph, but the feeling of sadness and pride ran through us all and I don't mind admitting it but a few tears were shed as again we spent a moment in silence.

Chris Timmer and Mr de Lange then invited us back to their lovely home where a barbeque had been prepared, for our early evening meal, and believe me this was some meal, all kinds of food were there for our enjoyment, toped of with the odd bottle of beer. We spent the evening eating, drinking and chatting amongst the most enjoyable of company.

All too soon the evening came to a close and it was time for us all to say goodbye to our newfound friends, this entire experience had made possible by the heroics and self-sacrifice of a very brave young man nearly sixty years ago.

I could not help myself from reflecting back to something I had seen written on a tomb in Egypt; the land of immortality, where we had been for our holidays the year before, it summed up for me our weekend in Holland and the reasons for our visit there.

'He who should ever 'speaketh' my name; makes me live forever'.