Hawker Tempest Mk. V with serial number EJ709 was delivered to 274 Sqn at B.82 Grove, Holland, in October 1944. On 15 October F/O George Taylor Kinnelll (RNZAF) flew an armed reconnaissance mission over Münster in EJ709. At circa 11.35 he was hit by flak and crashlanded at Nieukerk (5 miles S/W Wageningen). F/O Kinnell survived the crashlanding and was taken Prisoner of War.

The aircraft was salvaged by 2./Versuchsverband O.K.L. and ferried to Finow. The damaged was estimated to 15 %. At Finow, the Tempest was repaired with parts of a Tempest which was shot down at Thiene near Hesepe on 29 December 1944. The repair of EJ709 was finished on 4 January 1945.

Hans Werner Lerche, a Rechlin test pilot, ferried the Tempest  to Rechlin at the end of January. In his book "Luftwaffe Test Pilot: Flying Captured Allied Aircraft of World War 2" he writes about testing Tempest EJ709. Because of problems with the engine the testing was fraught with problems. But Lerche made test flights with the Tempest at Rechlin still in mid-April 1945. The fate of EJ709 is not known.

In the book "Focke-Wulf Ta152" by Dietmar Harmann there is summary of the test flights made with EJ709:

Several days ago a new fighter in service with the English air force, the Tempest, was ferried to Rechlin for testing. Although no performance measurements have been made, performance may be somewhat less than the cliamed 690 kph at maximum boost altitude of 6,000 meters with emergeny power using the Napier Sabre IIA enginge. Rechlin estimates performance with short-term emergency boost as 560 to 570 kph at ground level and 670 to 680 kph at the maximum boost altitude of 6,000m.

Rechlin estimates that installation of the Sabre VI engine, which has yet to reach the front, will result in speeds of about 620 kph at ground level and 730 kph at maximum boost altitude of 8,000 metres using short-term emergency boost.

The Sabre II engine has an emergency output of 2,230 hp at 3,700 rpm and 1,66 atmospheres boost pressure. Rechlin made the following assessment of its flight characteristics:

d)  Aileron forces increase sharply above dynamic pressure and especially at maximum deflection. Stall behavior probably poor, however not yet confirmed since throttle lever fractured on this flight and stall behavior could not be observed.

The Tempest shows a family resemblance to the Typhoon but structurally is very different and more closely resembles the Spitfire with its elliptical wing planform. It is noteworthy that it has the sliding canopy of the 190, however since the pilot sits higher visibility from the cockpit is somewhat better than in the 190. The sliding hood has the same head armor, but it is only 10 mm thick. The wing has a laminar profile. The vertical tail has been enlarged through the addition of a prominent fuselage fillet, which is similar to that of the B-17.

The mainwheel arrangement has been changed so that a tire change now only requires the tire with hub to be removed instead of the entire wheel. This makes quick tire changes possible.

The Tempest has allegedly been used against the V1 device, and 600 V1s are said to have been brought down through the expedient of the Tempest overtaking the V1 rocket in a dive and causing it to crash by making contact with its wing. An elastic device is probably fitted to the wing in order to avoid damage.

No known photo exists of "Goering's Tempest". But based on photos of captured Spitfire, Hawker Typhoon etc Graham Berry has created the profiles below. Perhaps EJ709 looked like this while flying for the Luftwaffe?! 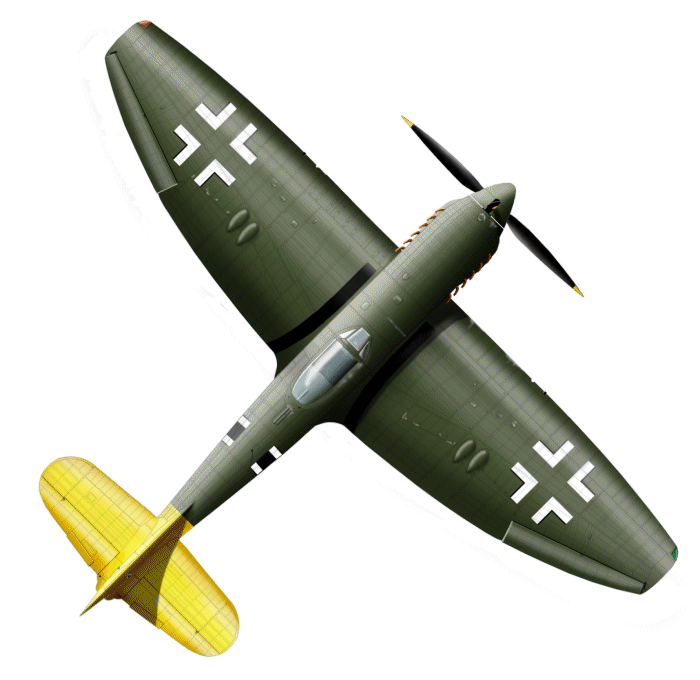 Many thanks to CloCloZ, NZTiffie and Graham Berry for the help making this article.