My search for Ralph - The Canadian Connection

Leaving Bournemouth we went our separate ways for a short time, meeting again at OTU (operational training unit) where we were flying Hurricane aircraft and then on to conversion to the Hawker Typhoon. Shortly thereafter I was posted to 137 squadron while Ralph awaited his squadron posting. It was at this stage that I lost contact with him, often wondering what squadron he had been posted to.

The war ended and demob followed and from time to time I was able to learn what happened to others I had trained with. Some survived while others had been killed or wounded, but no word of Ralph. Over the years I pursued my search via various web sites with "old collegues"sections, Legion magazine, AirMail mag., RAF Aircrew Assoc web and numerous other search efforts. One of my magaziune entries was noted by a Mr.Edward Burnside of Toronto who provided me with a list of approx. 80 addresses and phone numbers for Hassel and Hassal's from across Canada. I seemed to recall that Ralph came from the west and more than likely British Columbia, so I got on the phone but no one knew of him.. Checked the book "They Shall Grow Not Old" and no Hassell so it appeared he had survived,but where was he?

Then on reviewing the Last Post List, Legion Magazine Mar/Apr 2003, I note a Ralph Hassall had passed away on Dec 19 2001,age 81, a member of the Legion Lakewood Post, Cleveland Ohio, USA. I further inquired to Legion Mag. as to the address and phone number of this branch which was provided. My interest at this stage was for any surviving relatives who may be interested in photos and info of Ralph that I would be glad to provide. On contacting the branch I spoke with a John Falkenstein who knew of Ralph and would be glad of any memorabilia for thier archives. I further expressed my desire to contact any next of kin. I also forwared photos to Mr. Falkenstein. Reeipt of the photos confirmed that he was the person I had been searching for for so long. This initial contact provided me with some details re. Ralph's death, apparently he had lived alone and had died on a Saturday but was not found until Sunday, his wife having predeceaced him. Funeral arrangements had been made by an unknown, possibly a niece with no advise to the legion branch. Consequently his passing had gone unknown, apparently to the Legion. As Mr.Falkkestein said that these findings would have been left undone had I not enquired about Ralph via my phone call.

J.F's search led him to the funeral parlor that handled the final arrangements,the grave site location and no stone marker.Which stared the ball rolling to have a stone marker placed. It was at this stage that the name and address of what was thought to be his sole survivor,his niece,was found, but several attempts to contact her failed.It was thought that she may have left the area.

On checking legion files J.F. found reference to 3 squadron RAF in Ralph's file documents, which in turn confirmed that Ralph had served with 3 squadron at the same time as Pierre Clostermann, the French ace, which is documented in the book The Big Show, written by Clostermann. Ralph is shown in one of the book photos standing beside Clostermann. Finally I have found out which squadron Ralph was posted to, 59 years later. Irronically when 3 was at Volkel and I was at Eindhoven we were only a few miles apart unknown to each other. JF sent me several photos of Ralph with 3 squadron, which were much appreciated. 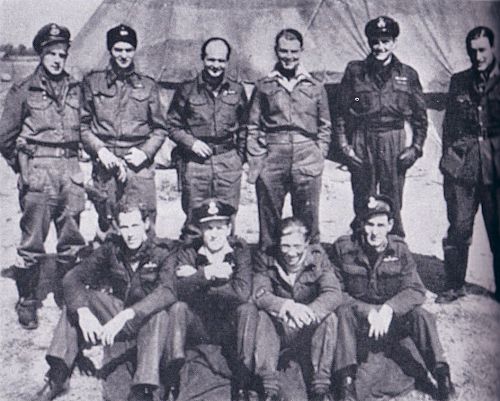 Getting back to Ralph's grave and the lack of a grave stone marker which had been brought to light by JF and Patrick McAllister, efforts were made to obtain financial assistance for a permemant marker depicting his service to his country, but to no avail. So, it was decided that local action was required to raise the necessary funds,which succeeded. I was asked to assist in the stone design, which I sketched and sent off to JF, along with Ralph's proper air force title, serial number and badges of 3 squadron and the RCAF, all of which were to be represented on the finished stone. After numerous visits to the stone mason by JF and PM the final design and granite stone were approved and found delivered to the cemetery on 3 May 2004.

In closing I would like to mention some of the names that contributed to this endeavour as mentioned by John Falkenstein (prime mover in Cleveland), Dick Conforto, Commaander Stone and Patrick McAllister. I am sure there are many more so to one and all I say thanks for your dedicated support in my quest.