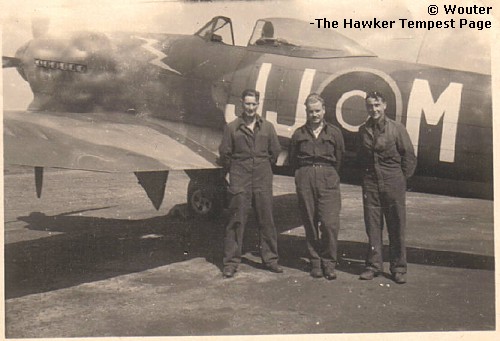 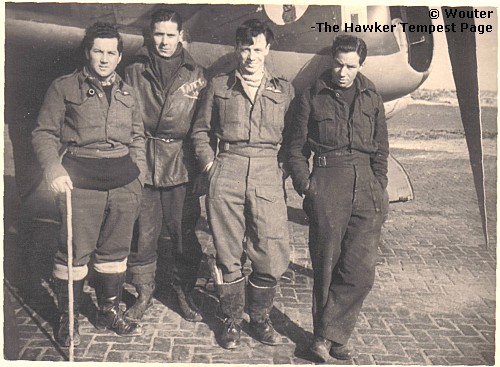 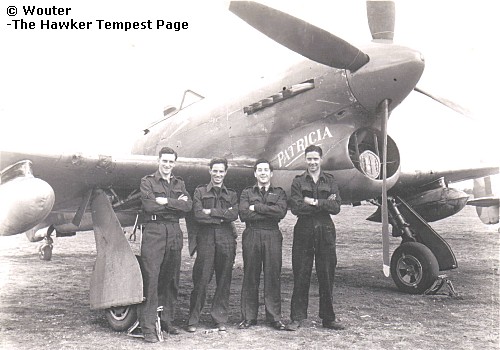 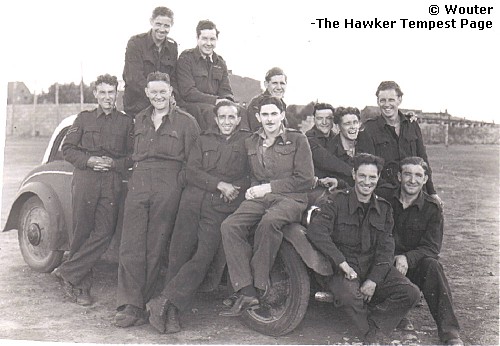 Information concerning the photos above:

Two years go my dad died, shortly before he told me that he had recently visited the little museum at Tangmere and he had recognised his cousin (who was brought up with him as his step-brother). My dad thought a great deal of him, his name was Ernest Griffiths. I too remember him but from the 1960's and 70's so am having to do a bit of mind modelling and cast his features 25 years on...
I think Ern is the one sitting down on the far right of the picture, as you look at it, on the bumper of the car. Ern died in the seventies but we have a family wedding this Friday at which I will be seeing Ern's eldest son - I will show him the picture - do you have any other information that would corroborate my thinking?
All I know is that Ern started flying for bomber command on Lancs, then transferred onto Typhoons and possibly later to Tempests. Does this sound plausible?
Gavin
(March 14 2005)

Thanks for the info, please keep us informed how it ends!/Christer

An e-mail from John Colton:
Hello,
You mention Volkel re your photos. Maybe they could be of 3 squadron who were located there prior to armistice.I had a personal friend,Ralph Hassall who flew with 3 at this time along with Pierre Clostermann,the French ace. I flew Typhoons with 137 during this time. Hoping this may be of help.
John Colton.
(January 2 2006)

Thanks for that input John, anything which helps identifying the photos is welcome!/Christer

An e-mail from Jeffrey Dearth:
Dear Sir,
The pilot standing second from the left in the 2nd photo of this series, in the leather jacket with thick scarf around his neck, is none other than Pierre Clostermann who was a flight commander with 274 Squadron at Volkel. As you point out on the page, all JJ-coded aircraft came from this Squadron. Clostermann's Tempest, for a time, was JJ-B. A quick glance at the pictures of Clostermann in his book, "The Big Show", will confirm the identification. I'm sure the other pilots are probably mentioned in the text of the book, but verifying their identities will take more research.