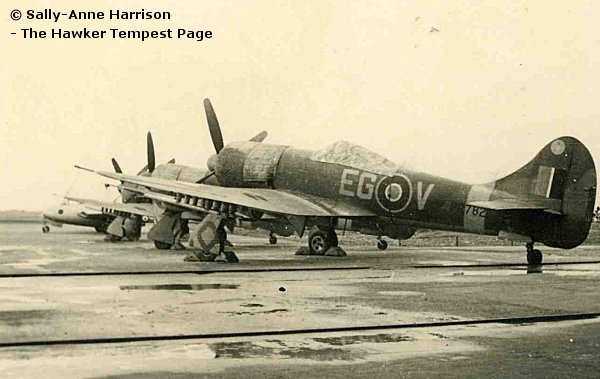 The Webmaster received this photo from Sally-Anne Harrison:

I saw your forum on the web and wondered if any of your members could help with some research I am doing on my fathers war diaries.
I have a picture from my fathers collection and wondered if you could shed light on it i believe it is of Tempests. It was I think taken at end of WWII possibly in Germany/Holland. Could anyone tell me which squadron, or when taken and what the jet in background might be. Also Dad flew with 2 squadron at the of war. One entry in log book reads:

"-6thFebruary 1945 Gilze-Rijen "I did a TacticalRecce in the Arnhem-Reichswald-Wesel area. The river appeared breached at E7563 and there was slight flooding. No movement was seen from Reichwald Forest.2 Barges stationary at Rees with light and heavy flak over the area but escaped any damage.
However, on my way back, I was attacked by some Tempests of 83 Group. As our Spits are camouflaged for low-level flying I think they must have got the jitters and mistaken me for a Jerry. Luckily, their shooting wasn’t up to scratch and I managed to evade them and brought the Spitfire back with several small holes,which were quickly mended."

Can anyone help in finding out which squadron this might be.
Many thanks, Sally-Anne Harrison.

Webmaster reply:
The EG-code letters on the Tempest Mk. IIs say they are belonging to No 16 Squadron. The jet in the background is a Vampire FB.5. No 16 Sqn got their first Tempest IIs in August 1946 and flew them to January 1949. The first Vampire FB.5s were received in December 1948. Therefore it's probable that the photo is taken Dec 1948 - Jan 1949, the unit was then based at Gütersloh, Germany. I have no information about the Spitfire-Tempest incident I'm afraid. Anyone else? Please e-mail the Webmaster!