Every permanent R.A.F aerodrome in existence at the commencement of the Second World War was soon provided with a basic grass landing ground in readiness for the envisaged expansion of its flying commitment. A suitable site was found just south of Chilbolton for establishing a grass airfield to serve the R.A.F Station Middle Wallop, which itself had only recently opened as a fighter base.
Work on levelling the ground started in late 1939 although little in the way of facilities was provided initially. Nevertheless, the airfield was first occupied in September 1940 when No.238 Squadron came over from the parent station flying Hurricane fighter aircraft that were involved chiefly in the air defence of the Bristol area. Although conditions were very primitive the airfield continued to house a single fighter squadron through to December 1941, with either Spitfires or Hurricanes in use. Most of the services such as fuel, ammunition, and aircraft repairs etc., had to be supplied by Middle Wallop.

With the gradual expansion of Fighter Command it was decided to develop Chilbolton into a proper satellite airfield with full facilities. Contractors moved in to enlarge the landing area and lay down a perimeter track, around which would be several aircraft dispersal points and three Blister type hangars. A technical site was built in the N/W corner, plus several dispersed living sites that could eventually accommodate 2800 personnel.
Whilst this building programme was taking place, No.70 Group, Army Co-op Command had a requirement for an airfield in this area as they began to build up the Airborne Forces. In the summer of 1942 No.41 Operational Training Unit that was based at Old Sarum used the airfield for circuit and landing practice. The type of aircraft then in use for training new army co-op pilots were Tomahawks, and these flew over on a daily basis until November 1942.
Chilbolton then became a satellite for Netheravon, and the temporary home of the Glider Pilot Exercise Unit. It started out in a small way on the 17th December with the arrival of their Tiger Moth Flight, but in January the rest of the unit moved in with Miles Master tug aircraft and Hotspur gliders. The role of this unit was refresher flying experience for the hundreds of trained army glider pilots that were in a state of limbo whilst waiting for the Invasion of Europe to commence. On the 10th May 1943 the GPEU departed to Netheravon, but in the meantime in March 1943 the station had seen the presence of two fighter squadrons. These were Nos. 174 and 184 flying Hurricanes which were taking part in Exercise Spartan as part of 'Airfield 122', all in connection with the forthcoming invasion preparations.
Up to this point in time the airfield was only grass surfaced so yet again the station was vacated so that three concrete runways could be laid. It was also at this time that the two large T2 type hangars were erected and more aircraft dispersal points plus extra accommodations were added.

In December 1943 the American 9th Air Force was arriving in England to take part in the forthcoming Invasion of Europe and required dozens of airfields. Chilbolton was one of the many loaned to them and in January 1944 it became the temporary home of the 5th Tactical Air Depot which supplied the needs of USAAF Groups about to move into airfields in southern England, in particular servicing and supplying P47 Thunderbolt aircraft. On the 15th of March 1944, the 368th Fighter Group arrived from Greenham Common, complete with its three squadrons of P47 Thunderbolt fighters. These were to be fully engaged in the softening up straffing missions to France. When the actual invasion took place in June they were fully involved for twelve days. However, once landing strips had been provided on the Continent they transferred over to France on the 19th of June 1944. After the above hectic period the station acted as an air transport terminal and was used by different USAAF Transport Groups flying Dakota aircraft. They were involved in bringing in wounded personnel from France to be admitted into local hospitals. The Tactical Air Depot was still in bussiness until it too left in September. On the 11th of September Chilbolton became the base for the 442nd Transport Carrier Group which consisted of three squadrons of Dakota aircraft. During the month they took part in a large drop of airborne paratroops behind the enemy lines near the Dutch border, then towed Hadrian gliders with their paratroops and logistics the following day. After being employed in general transportation duties more troops were uplifted in December, but the Group departed soon afterwards, but continued to use the station as a form of transport terminal until vacating it in early March 1945. 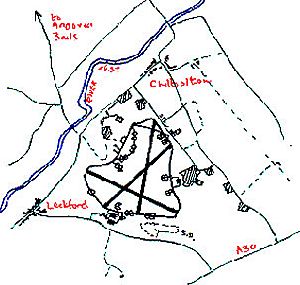 CHILBOLTON. 125, Hampshire. Map Ref: 5108N 0126W Chilbolton returned to RAF control in mid March and was taken over by Fighter Command on the 23rd of the month to become the new home of No.41 Operational Training Unit. The role of this unit was the training of tactical recce pilots for which it used Hurricanes and Spitfires plus a few Miles Masters. However, with the war coming to a close the requirement was running down and on the 26th of April 1945 the unit was disbanded.

Middle Wallop now took a renewed interest in the airfield and started to use it to house a few fighter squadrons flying Typhoons, Spitfires or Tempests, these latter forming into the Tempest Wing. It was here that the Vampire jet fighter was first introduced into squadron service in April 1946, but all the fighter squadrons had departed by the 27th of June 1946. The station then started a slow run down and clearance of equipment etc, but on the 18th October 1945 it was taken over by Maintenance Command to act as a sub-site to No.3 M.U based at Didcot. Surplus RAF equipment were stored in the hangars and other buildings until all had been disposed of by the 11th June 1948. Although no personnel were billeted here other stores were forthcoming, this time surplus ammunition. This was the responsibility of No.202 M.U that used part of the airfield from April 1950 through to the time that the RAF finally severed connections with Chilbolton on the 24th June 1954.
Back in February 1947 the runways had been taken over by the Ministry of Aviation for use as a testing site for Vickers Armstrong Ltd. At that time they were flight testing the new Attacker jet fighter and final assembled subsequent aircraft here in a new hangar that was built for them. The Super Marine Swift was likewise test flown here from 1949 onwards.

In 1954 the Folland Aircraft Company also moved their test and development unit here to process their mini Midge jet fighter, followed by the Gnat trainer later in the decade. In 1957 the Swift aircraft production had come to an end but Folland stayed on, flight testing their Gnats coming off the assembly line. In 1961 they transferred this work to Dunsfold and Chilbolton finally ceased to have any further associations with aviation. In 1963 the centre of the airfield began to be developed into a Space Radio Research Station and numerous aerials and dishes appeared. It still serves in this capacity today but the majority of the rest of the airfield has returned to agriculture with all runways long since being removed.