Even whilst the Second World War appeared to be hanging in the balance provisional plans were being made for the Invasion of Europe by the allies. The planners soon realised that there would have to be several new airfields built on the south coast of England to accommodate the vast number of fighter aircraft involved, not only flown by the R.A.F, but also the American Air Force.

Because these Advanced Landing Grounds would only be required for use during the summer months it was considered that only two metal mesh runways would be needed, and that all personnel would live under canvas, thus no buildings would be provided, although certain farm buildings were taken over.
A suitable site for one of these A.L.Gs was found near Newchurch on the Romney Marshes, which incidentally was the location of three other such 'airfields'. However, in the opinion of Wig Commander Beamont this one at Newchurch was the best of the bunch for his 'Tempest Wing' because it had unobstructed approaches from all directions. Work on clearing the site of trees and the filling of ditches etc., started in January 1943, most of the work being carried out by soldiers of the Royal Engineers and the R.A.F Airfield Construction team. Two steel mesh runways were pinned to the grass surface at this time but very little else in the way of facilities. Towards the end of the year four Blister type hangars were erected and more steel matting applied for aircraft servicing areas.

To give fighter squadrons experience at operating from these primitive conditions most of these A.L.Gs were occupied for a few weeks in mid 1943. This one was allocated to 'Airfield 125', this being the rather silly name given to a group of fighter squadrons that were to operate together in the overall invasion plan. On the 2nd of July Nos. 19 and 132 Squadrons arrived with their Spitfires together with all their ground staff and equipment that came in by road. Both squadrons immediately started to fly escort missions over to the Continent for the American Air Force daylight bombing missions.

In August one of the squadrons departed but two others joined the remaining one and thus made up the usual strength of these 'Airfields' So great was the need for daylight bomber escorts that these squadrons remained here on this duty longer than normal, and it was 12th of October before they retreated to a more permanent airfield at Detling. 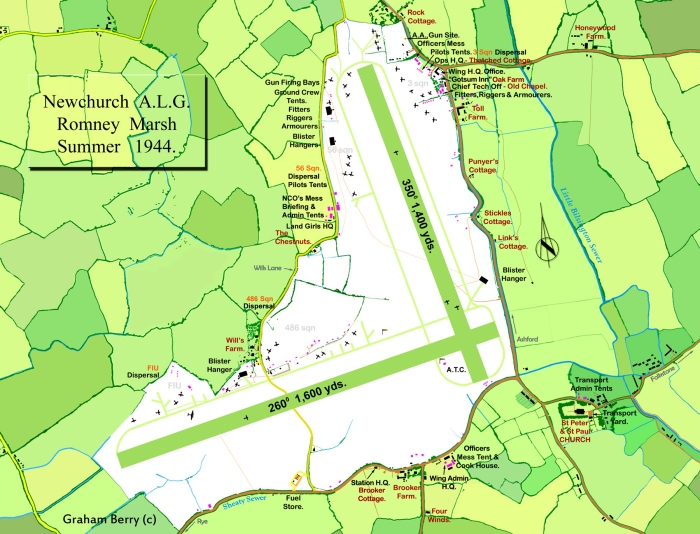 After laying dormant for several months, during which time the Blister hangars and extra steel planking was laid as previously mentioned, the A.L.G was inspected for further use by Wing Commander Beamont in April 1944. On the 28th of April he brought in his 'Airfield 150', which for the first month only consisted of two squadrons of Tempests, to be joined on the 1st of May by the third squadron, equipped with a mixture of Spitfires and Typhoons. There was now a compliment of 12 Spitfires and 36 Tempest at Newchurch. Missions against strategic targets in France were to be performed daily, all in some way connected with the forthcoming invasion. All these aircraft carried cannon guns that made a nasty mess of enemy trains and road traffic in the Normandy region. With the Tempest being the fastest fighter in the R.A.F they were also being used for shooting down the V1 Flying Bombs which were becoming a menace over Southern England at the time.

By the time of the invasion the silly name of 'Airfield' had been replaced by ' Wing', this one becoming known as No.150 Wing. Although it was fully involved with the invasion operation in early June it paid more attention to the Doodle Bug menace. For this the Wing mounting continual patrols over Kent to shoot down these deadly devices before they reached London. The Tempests proved very successful in this task and accounted for scores being shot down, even some of them during the hours of darkness.

Due to the above extra role this A.L.G was occupied longer than most of the others and it was the 23rd of September 1944 before the squadrons vacated it and peace and quite returned to these otherwise tranquil meadows. In December 1944 the engineers returned to recover the metal mesh and pull down the hangars. By early 1945 the area had returned to agriculture.