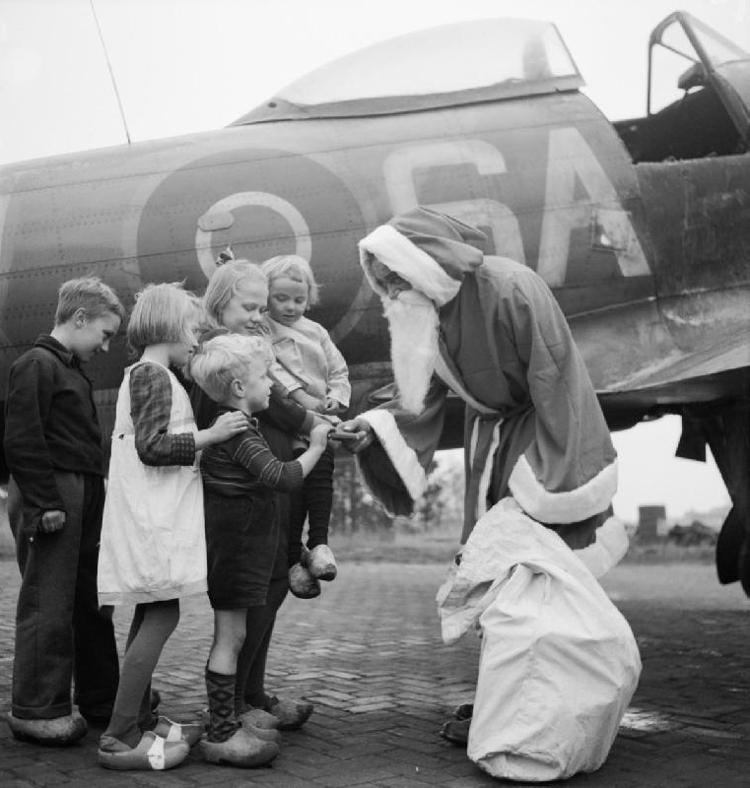 Santa Claus (Leading Aircraftman Fred Fazan from London) hands out presents to Dutch children at Volkel, 13 December 1944. Members of No 122 Wing had saved their sweet ration for weeks, and contributed enough money to give the children their first proper Christmas party. Santa's sleigh was this time replaced by Tempest Mk. V SA-W (EJ714).
"Reaching Newchurch airfield at 480 mph I held "RB" down to 20 ft from the runway and then pulled her up to a 60 ° climb holding it as the speed dropped slowly off and the altimeter needle spun round the dial as if it were mad. At 7000 ft the speed was dropping below 180 mph and I rolled the Tempest lazily inverted, then allowed the nose to drop until the horizon, at first above my head, disappeared below (or rather above) the now inverted nose, the fields and woods steadied into the centre of the windscreen and then whirled around as I put the stick hard over and rolled around the vertical dive. Steadying again I pulled out over the tree tops at 500 mph, throttled back and pulled hard over towards the airfield in an over-the-vertical climbing turn, lowering the wheels and flaps in a roll as the speed dropped. What a magnificent aeroplane! They could have all their Spitfires and Mustangs!"
("My part of the sky", Roland Beamont)

"The Messerschmitt Me 262's most dangerous opponent was the British Hawker Tempest - extremely fast at low altitudes, highly-manoeuvrable and heavily-armed."
(Hubert Lange, Me262 pilot)