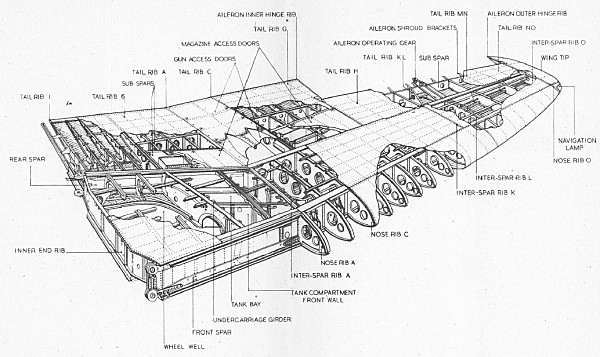 The stressed-skin cantilever main plane consists of port and starboard wings which axe attached directly to the fuselage, are semi-elliptical in shape and taper in thickness towards the tip; the undersurface is horizontal for approxmately one-third of the span and the outboard portions rise to form a dihedral angle. Two 20 mm. Hlspano Mk. V guns are carried in each wing.

In the bottom surface of the inboard portion of each wing there is a well which houses the undercarriage wheel in the "up" position; a fairing attached to the shock-absorber strut, and a hydraulically-operated door hinged at the root end rib, cover the housing when the wheel is retracted. A fuel tank is situated in each wing between the spars, immediately outboard of the wheel well. A nose fuel tank, shaped to form the leading edge of the aerofoil section, is fitted on the front spar of the port wing only, in front of the inter-spar tank and the wheel well. The oil cooler is mounted in a similar position in the starboard wing and an air intake for the carburettor is situated at the root end of each wing, in the leading edge inboard of the nose fuel tank or the oil cooler. The guns, together with their ammunition boxes, case and link chutes and pneumatic firing gear are housed in the inboard portions of the outer planes. Navigation lamps are fitted in the wing tips and there is a remotely-controlled retractable landing lamp in the lower surface of the port wing. On early aircraft the electrically-heated pressure-head is mounted on the outer portion of the port wing, just aft of the rear spar. On subsequent aircraft it extends from the leading edge of the port wing tip.

Basically, each wing consists of a structure of front and rear spars, inter-spar ribs, nose ribs and tail ribs, with a covering of light-alloy sheet strengthened by stiffeners. An unusual feature is that the rear spar is cranked sharply forward from the root to the dihedral point. There is a torsion box between ribs A and L, made up of the front and rear spars in that area together with the inter-spar ribs and the top and bottom skin coverings of heavy gauge light-alloy sheet. High-tensile steel plug-ends are bolted to the spars for attachment to the fuselage,’ the tapered joint pins being horizontal at the front spar and vertical at the rear.

From the root end to the dihedral point, the front spar has top and bottom T-section booms made up from two thick L-section extrusions riveted together; outboard of this point the booms are of normal extruded T-section. Both the inner and the outer booms are fixed to a heavy-gauge light-alloy sheet webi outboard of the break and as far as inter-spar rib K, access hoies are prowded in the web, and are covered with light-alloy plates riveted in position.

The rear spar is similar in most respects to the front spar. except that it is cranked sharply forward from the root end to the dihedral point and has access holes covered with plates, from the break to the tip.

The sub-spars are all aft of the rear spar and consist of light-alloy flanged webs.

The nose ribs, of which there are eighteen in each wing, consist of plate webs flanged along the top and bottom edges, with flanged lightening holes. Nose ribs A, C and 0 are additionally stiffened round their top and bottom contours by light-alloy angles rireted in place. The inner air-intake’rib on the port side is fireproofed with asbestos sheet to protect the nose tank, should the engine catch fire.

The tail ribs are of several types. Ribs 1 to 6 consist of light-alloy plate webs with their top and bottom edges flanged to a channel section above the gap for the flap; tail ribs 1 to 5 have, in addition, tubular bracing members between the rear spar and the flap gap, all the ribs being recessed to accommodate the flap, Between the rear spar and the sub-spar, fomard of the cut-away for the aileron, are tail ribs H to NO. These are not full ribs but consist of light-alloy plate flanged webs, each containing lightening holes. The inner and outer aileron hinge ribs comprise light-alloy flanged webs and are fitted with hinge brackets to support the ailerons.

The aileron operating gear is situated approximately half-way between tail rib G and the wing tip, between the rear spar and the main sub-spar. It consists of a light-alloy plate structure to which the control lever is pivoted.

Additional structure has been 1 introduced in the wings just outboard of rib D to provide attachment points for the drop fuel tanks. In each wing there are two support hooks. The front hook is part of a special spring-loaded release unit which is bolted in a mounting bracket. This bracket is, in turn, bolted to the forward face of the front spar. The rear hook is attached to a bracket which bolts on to the forward face of the rear spar and is supported by a tie channel picking up with bolts at the top spar boom.

Additional structure has been introduced into the wings ta provide attachment points for the bomb carriers and, aft of these, the bottom wing skin is reinforced by angle-section stringers to prevent cracking due to buffeting caused by certain types of bomb. The front points consist of two support channels, on each of which there is a special anchor nut, attached to the rear face of the front spar on each side of rib D. At the rear, the anchor nuts are mounted on two channels attached to inter-spar ribs C, D and E by angle brackets. On the rear face of the rear spar there is a pulley for the Bowden cable of the mechanical release control, and also a bracket which supports the mechanical release operating lever.

To cater for the installation of rocket projectiles additional structure is provided in the wings to support the R.P. mountings. Bearer channels are mounted in the outboard ammunition tank bays forward of the tanks, between tail ribs C, E and G. Suspension sockets are mounted between the bearers at an angle of 7 deg. to compensate for the taper and dihedral of the wing. At the lower ends of the sockets sealing caps are fitted to provide attachment to the wing skin. At the top of the rear sockets sealing caps containing electrical sockets are mounted and held in place by elastic cords. The front mountings for the R.P. rails are attached to the brackets mounted on the forward face of the front spar.

In the wheel well, between the inner end rib and the undercarriage girder, the upper skin incorporates two heavy longitudinal girders and a number of lateral stiffeners, which eliminates the necessity for internal structure. Similarly, the girder over the inter-spar fuel. tank is incorporated in the top skin of the wing, and attached to a number of lateral stringers. When the wheel is retracted the undersurf?ce of the well is closed by a fairing on the shock-absorber strut and by two wheel doors, one of which is hinged on the inner end rib and a smaller one at the top of the leg, hinged at the undercarriage girder. The lower skin under the inter-spar tank is attached to the latter and is detachable with the tank. It is normally unfastened from the fuel tank only when it is necessary to obtain access to the tank sump.

The tank compartment front wall consists of a single sheet of light-alloy with a flanged upper edge and an angle section boom riveted to its lower edge.

The covering of the wing is entirely of light-alloy sheets, varying in thickness according to the load distribution on the structure. The area between inter-spar ribs A and L, bounded by the front and rear spars, has a top and bottom covering of heavy gauge plate to form a torsion box.

A detachable gun door is provided in the nosing between nose ribs A and C, to accommodate the muzzles of the guns.

The wing tip is riveted to inter-spar rib 0 and consists of two light spar extensions with light-alloy flanged web type ribs. Four pegs fixed to the spar extensions locate the wing tip for assembly. A navigation lamp is situated in the angle between inter-spar rib 0 and the front spar extension, and is covered by a detachable transparent acetate sheet window which thus forms the front portion of the tip. The remainder of the wing tip is covered with a light-alloy skin. On all but a few early aircraft the pressure-head is mounted on nose rib 0 inside the port wing tip, and it extends forward of the leading edge of the tip.

A retractable landing lamp is provided in the lower surface of the port wing, outboard of tail rib G and aft of the rear spar.

Doors and detachable panels in the wings provide access to control connections and components within the wing structure; they are secured either by screws around their edges or by turnbutton fasteners.

Each of the ailerons is of sheet metal construction and consists of a light-alloy channel section spar built up to form a D-shaped nosing. Aft of this spar, the structure comprises a number of light sheet metal ribs, and is covered with pre-tensioned duralumin skin riveted to the spar and ribs. At each end of the aileron spar is a self-aligning ballrace which is contained in a bearing housing in each of the aileron hinge ribs. The aileron operating gear is situated in the wing between the rear spar and the sub-spa at approximately the middle of the aileron, which it operates by means of an arm and rod which are bolted to a hinge bracket attached to the aileron spar. An adjustable trimming tab is provided in the trailing edge at the inboard end.

Each aileron trimming tab consists of a streamline section light-alloy tube riveted on to a light-alloy former at each end. A hinge pin in the nose of the tab pivots it on the aileron inner end rib and rib No. 5. The tab may be adjusted on the ground, to the required angle of incidence.

The flaps are in four portions, two being provided under each wing, and they extend outboard from the wing root to tail rib G. The two portions in each wing are joined together at the inner end of the gun bay (where the dihedral commences), the spars being connected by a universal joint. Each flap consists of a single sheet of light-alloy stiffened with ribs of the same material, with a tubular steel spar. Each portion is supported by three journal bearings which are bolted to the trailing rib structure.

Each pair of flaps is operated by a hydraulic jack, anchored by means of a shackle to an eyebolt passing through the lower boom of the rear spar. The flaps are interconnected by a spar extension which passes across the fuselage to ensure that both port and starboard flaps are at the same setting.