Intelligence had prepared the British authorities for an attack on Southern England by robot weapons. Bombing attacks were made on the German research estabishment at Peenemünde and factories belived to be involved in the production. These attacks delayed the introduction of the new weapon and prior the Normandy Invasion of 6 June 1944 much effort had been expended in attacking launching sites in the Pas de Calais area between Dieppe and Calais (France). 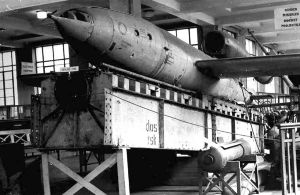 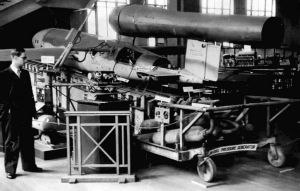 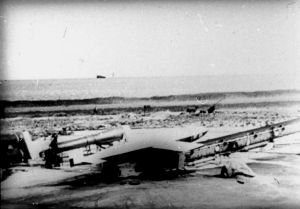 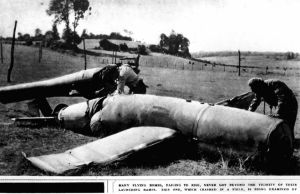 Initial response was to extend the attacks on the launching sites, whilst fighters formed the first defence over the Channel and the South Coast. 192 heavy AA guns and equal number of light weapons provided the next line of defence. On the eastern outskirts of London 480 balloons provided the final element. Initial patrols were made by 11 squadrons, two Mosquito-equipped fro night operations.The first offensive launches were made on 12 June. Only ten were launched of which seven crashed or blow up at once! The first to reach England fell on Swanscombe at 0418 hours on 13 June. Thereafter the launch rates incresed rapidly, in 24 hours 151 V1s were reported by the defences. During the night 14/15 June the first interception of a V1 was made over the English Channel by Flt Lt J.G. Musgrave of 605 Squadron (flying a Mosquito) and this was shot down. 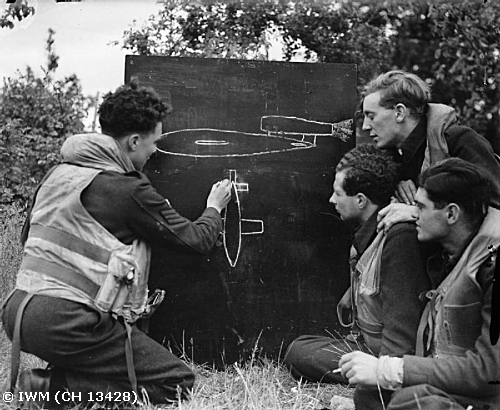 These arrangements were inadequate and the guns were increased to 376 heavy and 540 light weapons and the balloons were strengthened to around 1000. Fighter units included the new 150 Wing at Newchurch with three squadrons of Tempests, Spitfires of 41, 91 and 322 Squadrons and Mustangs of 129, 306 and 315 Squadrons. A special flight of Tempest was formed at Wittering with pilots of the Fighter Interception Unit. This moved to Newchurch to join the other Tempest squadrons. Over the weeks which followed further units became involved including Polish Mustang, radar-equipped Mosquito and Typhoon squadrons.

By 15 July 2578 V1s had reached England. 1241 were destroyed by the defences, 1280 falling in the London area. Between 9-15 July the percentage destroyed reached 50%, mainly by the fighters. The damage caused were still to high whereby the guns were moved to the coastal area. On 19 July 412 heavy and 600 light weapons were in place together with 168 Bofors and some rocket batteries. Now the fighters patrolled over the Channel and over central Kent, between the guns and the balloons. The guns were now receiving stocks of proximity-fused shells, which increased their results. Between 16 August and 5 September only 17% of the 1124 launched V1s reached their target area. On the night 27/28 August were 87 of 97 V1s shot down!

Left: Flight Sergeant Morris Rose of No 3 Squadron points out the essential characteristics of the V-1 flying bomb to other Tempest pilots at Newchurch, 23 June 1944. The Scottish pilot downed his first 'doodlebug' on 16 June, and by the end of July had claimed a total of 11 destroyed.

By 5 September the Allies armies had overrun the launching sites and the attacks seased. By this time two more Tempest squadrons had joined the defences, 274 and 501 Squadrons. On 16 September the assault was resumed. Seven V1s were air-launched by Heinkel He11 bombers operating from airfields in Holland. 80 V1s were launched in this manner in late September, 23 were destroyed. In March 1945 104 were launched from ramps in Holland. The last fell on England on 28 March 1945, and the last to be launched was shot down the next day.

Between June 1944 and March 1945 3957 V1s were claimed to have been destroyed. 1979 by fighters, 1866 by guns, 232 by balloons and 12 by Naval guns. The totals claimed by individual squadrons are a somewhat higher figure when added together than the numbers above. The confusion appears to arise from the system of confirmations used at the time, the list below is the best that can be arrived.

Note: The seven squadrons with most claims plus all Tempest squadrons are listed (of a total of 33 squadrons which claimed V1s). 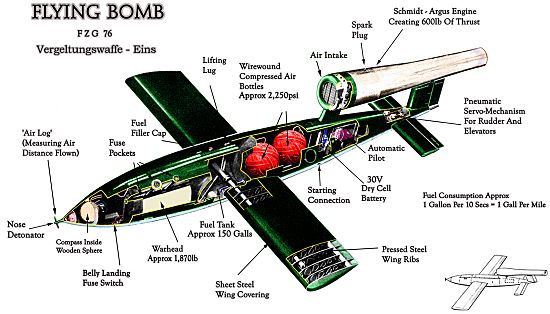