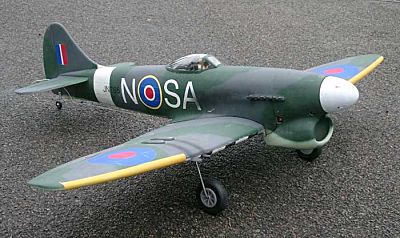 Not my work this one.......but I thought I'd stick a few photos up of my Dad's recently completed Skyshark Tempest. Power is an Irvine 61 2-stroke with dustbin silencer, standard 'spring air' retracts, glassed with Fibretech 1/2oz cloth and resin. Paint is mainly Flair Spectrum, with Humbrol enamels used for the weathering. A small amount of panel detail has been added with gridding tape, and hatches in self adhesive aluminium foil tape.

AUW is currently 6lb 13oz, prior to a CG check. CG is currently around 1/4 to 1/2 rearward, so a little lead is needed as everything is as far forwards as it will go......he reckons somewhere around 7 1/2lb ready to go. Post test flight report:
The test flight was a real non event, AUW was 7 3/4lb (only needed about 3 or 4oz lead in the nose), so reasonable for a model of it's size. Once trimmed, I only had 2 circuits before the engine quit, and I had to carry out a fairly fast 360 degree circuit to land.........no drama what so ever.......the landing was nice and steady, not what I would call fast, and very controllable........it showed NO nasty tendancies at all, and never showed sighns of wanting to nose over on the grass strip. All in all, it's a nice model, but alas, Dad has no sold her on as he's decided he's had enough of 'small' models, and has moved up a notch to 90/1.20 size warbird..... 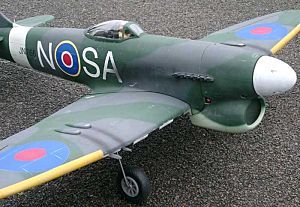 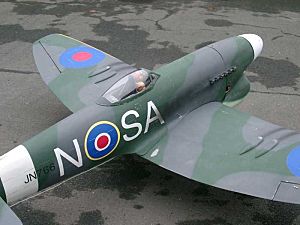