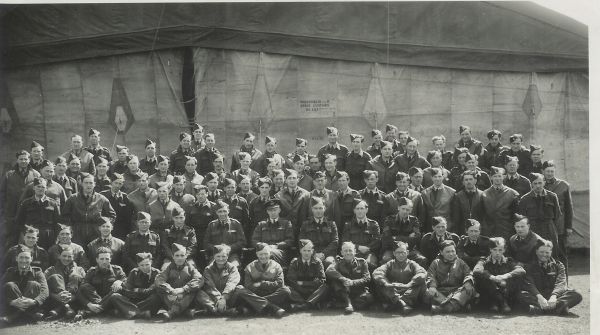 B Flight 151 Repair Unit stationed at Wevelgem, Belgium in 1945.Walter is located in the back row in the small cluster of guys on the center right.

As soon as the war in Europe was over the unit was moved to Luneberg in Germany, and it was here I remained until I was demobbed in September 1946. The Tempest was a wonderful aircraft with the Sabre Engine to work on. We were given 2 1/2 days to take out the old engine, clean and repair as necessary the engine bay, reinstall the new engine and ground test.

Upon return to civilian life, I obtained a position as a Draughtsman in a Glucose factory. I studied at night school 3 nights a week for 9 years to obtain the necessary qualifications, and after a number of years, step by step I was promoted to Chief Engineer. I have worked as Chief Engieer with 2 other companies and General Mannager to another. I retired in 1986 from a Swedish company (Alfa Laval). I now live in Ewell, within the Borough of Epsom and Ewell in the County of Surrey, with my wife (with whom I have just celebrated 60 years of marriage). I have a Son, a Daughter and 4 Granchildren.

Thanks to Walter Reed for this interesting story, a different view of the Tempest!
Christer Landberg (Webmaster)